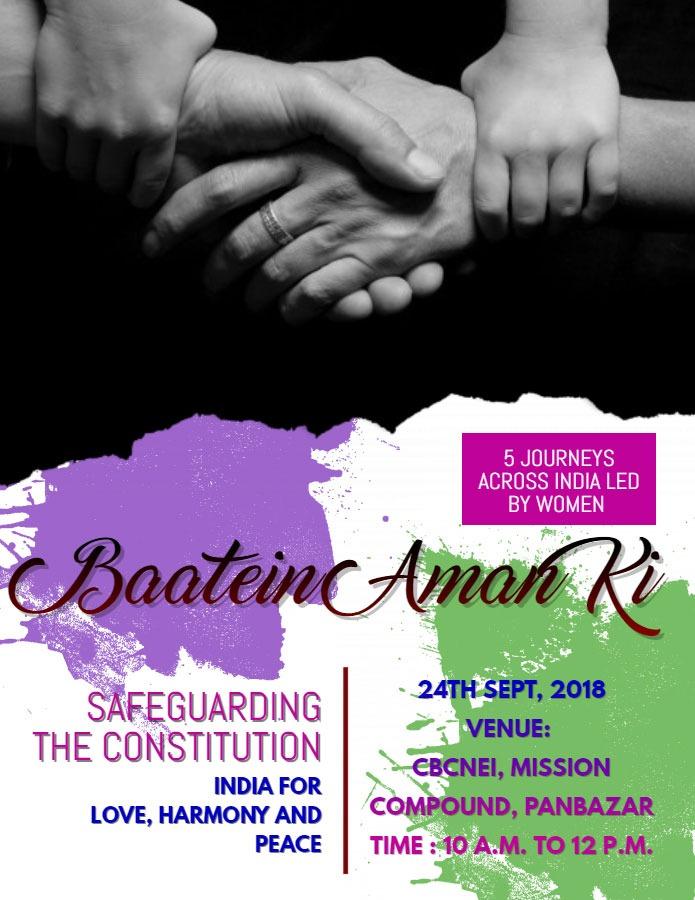 Journey of women through the heart of Assam across the banks of Brahmaputra is indeed an interesting one. It is a journey of knowing the length and breadth of the nooks and corners of the country at one go. Baatein Aman Ki or Peace Conversations is such a process which engages people, institutions and organisations to explore ways of understanding each other. It involves communities, people, women, activists, academicians and students to uphold the values of peace, co existence, harmony and democracy. This journey begins on Sept 22 and extends till October 13. It will be starting from Jorhat then go to Kaziranga, Tezpur, Nagaon, Guwahati, Bongaigaon, Gossaigaon and Kokrajhar before moving to Alipurduar. It has music, songs, stories, theatre, arts, culture and social awareness of engaging with cultures across the country. Why is it important to listen to the women and others who are not in positions of power and dominant political affiliations? Who is listening and who is creating this atmosphere to hear and be heard?

In a constitutional democracy of the country it becomes extremely important to share one’s story of trials and triumphs which has shaped the women as they are today. Sometimes we wonder why there is a culture of silence when it comes to women voicing their views and opinions in both public and private spaces. Women are always expected to be someone who she hardly identifies with. Her essence is always rooted with the family, community, culture and gendered perceptions revolving around her existence. Wonder if at all women have her own views and opinions beyond the strictures of norms associated with her bondages of life and living. In this journey will the conversations be stories of difference or commonalities or will they be stories of collective joys and sorrows which never find any public space otherwise. Should women be only speaking about her maladies or does she have to represent the medley of momentary pleasures? Women have played many roles of being spectators, inspirers, nurturers and recipients of the political, economic, social and cultural ecology of the idea of Assam in particular. Are they simply mouthpieces of larger interest specific agendas or are they really engaging with their issues of resilience and inequalities.

Peace conversation is indeed a journey of sharing the idea of peace amidst extreme intolerance, insensitivity, misogyny and hate where people become their own enemies. It entails a journey of ideas and identities which does not reach the podiums, platforms, dais, pulpits and sacred spaces otherwise. It generates a discussion around how the constitution of India translates to each and every person who identifies with the access, abilities and ambit of this dynamic document. Peace Conversation makes an attempt to set on a journey of living democracy through the ripples of hope, peace, equality and social justice. It engages with both public and private spaces where people tries to understand each other’s actions, limitations and strengths in drawing the dynamic idea of being part of a democratic nation like India. Can this journey of women from across the country really endure the bruises of indifference and ignorance which affects hazardous assumptions in a multicultural society like Assam? It is indeed a journey of her stories which are charted through the wheels of reaching out to the unseen contours of the state represented in many pockets through a confluence of communities working towards democracy, peace and coexistence. The journey begins from September 22 at Jorhat press club and moves to Kaziranga at Bokakhat field and then starts from Tezpur at Puruwa on September 23 and moves to Nagaon at Kamala Todi Bhavan and reaches Guwahati. It starts again on September 24 from Guwahati at CBCNEI Mission Compound at Panbazar and moves to Bongaigaon and reaches Kokrajhar on September 25 and moves to Alipurduar on September 25. Do join this journey of peace and democracy at any of these locations and talk about peace.