Bajali in the lower Assam has become the 34th district of the state, after governor Jagdish Mukhi issued a notification in the regard. In the notification governor has stated the newly formed district would include all the areas of the former Bajali Sub-division of Barpeta district. The headquarters of the new district would be Madan Rauta Nagar in Pathsala, the notification says. The Government has upgraded the civil Sub-division into a district in order to expedite government developmental and administrative works. 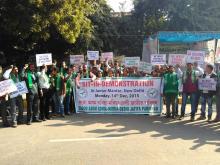 14 Dec 2015 - 8:20pm | AT New Delhi
Hundreds of people from Assam staged dharna in New Delhi raising a slew of demands on Monday. Under the banner of Sadou Asom Goria Moria Parishad, the protesters thronged the Jantar Mantar at 11 in...

18 Jan 2012 - 12:27am | Anup Arandhara
The proverb, “Third time lucky” is completely proved in a dangerous road accident today near the Simoluguri police station, of Sivasagar district. The bike rider's life is saved...

Efforts on to recover wreckage

11 Aug 2015 - 1:56pm | AT News
Efforts are on to recover the Pawan Hans chopper a week after it crashed in Thincca in the remote jungle area of Arunachal Pradesh.The men deployed in the operation took several hours to land in the...