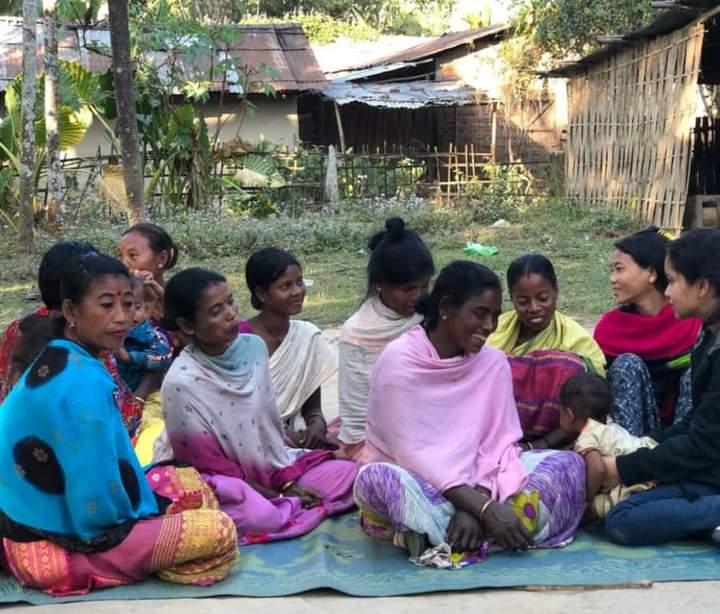 In Assam, usually flood and erosion displace human populace. But what is happening with the people of Mikir Bamuni, a nodenscript area near the green Karbi hills is different. The tribal and adivasi people inhabited area falls under the Nagaon district. The people in the area largely depend on agriculture. In this way, they pass their days happily. But this time they are facing eviction from their own land. Fear is growing that the eviction will render them homeless and displaced.

It has been alleged that the district administration has been forcefully requisitioning the paddy fields of the people since last year's summer, destroying crops for a Delhi based green energy producer farm. Immediately, after the eviction started, some local people moved to the Guwahati High Court which ordered them to go the Nagaon civil court. Accordingly, they moved civil court which accepted their petition. Advocate Krishna Gogoi, who has been representing the farmers said that the district court would deliver its verdict this month.

But surprisingly, Azure Power Forty Ltd, the green energy company for which the district administration has been requsitioning the land, has already started construction work in the land before any adjudication by the court.
Today, the people staged a protest demanding compensation to the people and  stoping the construction work. Informing this local CPI leader Ratul Bora said that what the distriction administration has done to the people cannot be accepted. Meanwhile, some local people alleged that the police and the paramilitary forces brutally assulted them including a pregnant woman. The pregnant woman suffered a miscarriage due to assult by paramilitary personnel. As per some media reports, the ghastly incident happened on December 29, 2021. They allege that the administration has violated the The Assam Tenancy Act of 1971 which asserts land rights to the people who continuously occupy a land for three years for agricultural activities. However, the Azure has claimed that they are carrying out the construction work legally. It has bought more than 271 bighas land in the area with the help of some local brokers.

Local people alleged that the administration served an eviction notice to them on March 18, 2020. In the following day the administration carried out an eviction drive as per the notice. Protesting this some people have taken legal recourse to secure their land rights. On the otherhand, the police have been pressurising them to give up the fight, alleged the aggrieved persons.

They also alleged that the security personnel continue to torture them.

Bidisha Barman, who is fighting for the poor farmers in a facebook has resented saying, “They who are bruised, injured, tortured by the police and military personnel on orders of GOA and Indian State to please the big corporate.
Hey Assam Police, GOA, GOI, Azure Power, APDCL why do you send truckload of armed forces after midnight and with black cloth covered faces to abuse, torture, arrest locals? Why?”

In today's protest meeting, which was attended by representatives from several organizations including AJYCP, Assam State Krishak Sabha, All India Krishak Sabha, MASS, Asom Mahila Sangha, and AAP demanded justice for the famers, said a press release. The release also added that the protesting organizations resolved to ghero the Nagaon Deputy Commissioner office.

14 Jun 2016 - 10:50pm | AT Kokrajhar Bureau
32 houses were dedicated to the riot affected families at Bhawraguri Jharbari village in Kokrajhar,which was initiated by Seva Bharati, Purbanchal in association with Samasta Mahajan(Jain Samaj),...