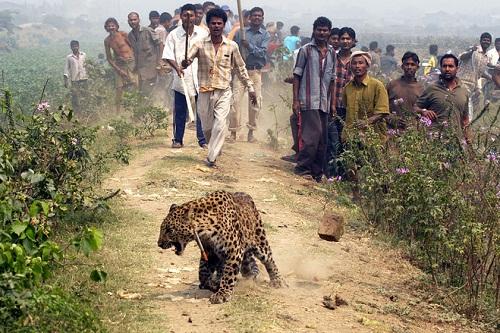 Known for its rich and unique biological diversity, Northeast India forms the core of the Eastern Himalaya Biodiversity Hotspot and is a World Wildlife Fund Global 200 Priority Ecoregion. Assam, one of the seven northeastern states, presents a landscape of lush evergreen forests and grasslands that is home to a great diversity of species including many of the rare cat species ranging from the magnificient tiger to the queen of the high mountains-- the snow leopard; the clouded leopard and the slinky common leopard--Panthera pardus. Of the magnificient felines--while the tiger enjoys the lion share of all conservation efforts, the leopard remains India's neglected big cat. Like all other species, the survival of the leopard is also under threat due to an expanding human population, and accompanying development and habitat fragmentation. There is no special home of the leopard in India. They are spread widely over the whole country and found to be the most adaptable of all the big cats. They are superbly made to live anywhere, survivng even on rats and frogs and also scavenge. The leopard's ability to survive on anything that is available means that the spotted cat does not need vast forests to maintain itself like the tiger or the lion.

The Wildlife Institute of India's estimate in 2005 showed 14,000 leopards in India including the almost 7,000 figure of the cat that live outside protected areas. That their numbers are more than tigers does not necessarily mean that these beautiful creatures are safe. They are poisoned, trapped and even shot while some die in accidents. To make up for the decreasing tiger numbers, hundreds of leopards are poached each year for their skin, bones and claws. Big haul of leopard bones were seized by police and forest officials on a number of occasions. While most of such cases go unreported, almost eight kg of leopard bones that included four skulls were recovered from two tea garden labourers in Golaghat district some time back.

The battle between the tea garden labourers and big cats in tea-rich upper Assam has witnessed over 150 leopard deaths in the last five years. The current year saw 12 leopard deaths till October of which 04 cases were reported from Golaghat district, 04 from Sivasagar district, 01 from Jorhat district, 02 from Dibrugarh district and 01 from Morigaon. Although there were no human death, but at least 10 people were seriously injured in leopard attacks.

Most disgusting are some recent incidents in Assam that saw people killing the animal not for its hide alone, but for its meat. Three such cases occured this year in which people took away the flesh along with teeth, nails and skin. These incidents were reported from Dergaon in Golaghat district and Teok, under Sivasagar district.

As Indian cat species are rare, most are protected under Schedule I and II of the Wildlife (Protection) Act, 1972. Killing of a leopard is an offence and anyone found guilty could be penalized under provisions of the law that includes a prison term of six years. Generally, mobs are involved in the killing of a big cat. As such, there are no case registered against the violators which is a disturbing trend that is having a terrible impact. Although the leopard is covered as a co-predator under the tiger conservation programme, the need of the hour is to concentrate on the animal exclusively.

The city of Guwahati has seen a spurt in human-leopard conflicts since the 90s. In the last few years the conflict has taken a turn for the worse with a number of the species killed by mobs.Once a stronghold of the spotted cat, Guwahati is fast shedding its green cover. Large-scale encroachment in forestland and in the hills that provided safe refuge for the big cat has shown a disturbing trend-- that the leopard is set for extinction in the city. Guwahati is said to be the only city in the world with a huge urban wildlife concentration. However, the destruction of wildlife habitat due to unplanned expansion poses grave threat to Guwahati's otherwise rich urban wildlife population.

The leopard is not a ferocious animal and both human and the big cat have co-existed over the centuries. But with the "prey biomass" (food like small animals) of leopards decreasing due to encroachment in the fringe areas of forests, the animal has developed a tendency to prey on cattle and livestock. This has led to reduction in the tolerance levels of people towards the animal leading to killing of leopards.

Prowling leopards have been a perennial problem for the tea gardens of Assam so much so that the tea industry has appealed the government to take steps to keep the big cats out of the tea states, which the industry claimed have seriously hampered tea production as labourers in many gardens are scared to go to work. The worst affected tea estates are in Jorhat, Golaghat, Sivasagar and Dibrugarh districts in upper Assam. The solitary cat sometimes lie up in a section of tea on a tea estate, and if the women who are plucking that section move in a line in one direction, the leopard will harmlessly slip out at the far end. But if two or more lines of women happen to converge on the place of its hiding, the cat feel itself cornered and usually make an angry dash for safety - mauling anyone within reach in the process. Translocation not the answer. 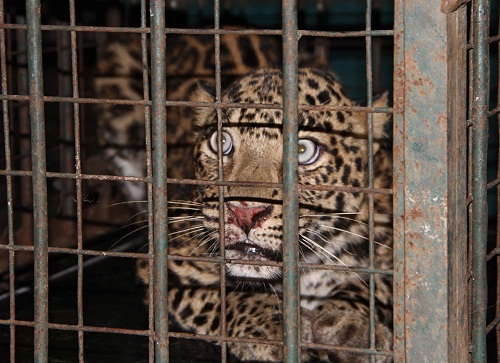 There has been a sharp rise in the number of straying leopards and the consequent conflict with humans. This year alone, more than 12 leopards were captured by the forest department and were translocated. We like to believe that translocation gives individual animals another chance. What we are doing is putting them deep inside the jungle in the belief that they are resilient and survive all odds. But the reality is quite different. Despite years of translocation, there has been no attempt to follow the released animals to study whether they survived or not. Translocation or the prevalent method of trapping the stray leopards and relocating them to faraway forests is flawed. A study reveals that in most cases when leopards attack without provocation, it is near sites where the trapped cats have been released. Leopards are territorial and when re-located, some will try hard to get back to their earlier domain. With vast wild spaces lacking, a leopard walking through a new inhabited area is a recipe for more disaster. It is important that these cats are not trapped as have been the norm with the forest department, instead the need of the hour is to build local capacity for addressing the problem and to follow a policy of co-existence by esnsuring safety of humans and survival of the species.

Previous Efforts In Mach 2012, as per our suggestion, the Assam government decided to constitute rapid response teams in all the 21 territorial forest divisions under its direct control. While anti-depredation units are there in each wildlife division their functioning has been marred by manpower and logistics constraints. On the otherhand the response system needs to be upgraded and better-equipped to deal with the growing incidence of straying wildlife.

Left to themselves, leopards will leave us alone Although leopards are found near human habitations, it was found that they avoid people.They have strong soicial bonds and the mother teaches her cub, who she takes care of for a year and a half, to stay away from people. As such successful educational campaigns are primary goals to reduce conflicts immediately and address the issue.

Raising anti depredation squads from among the local community to help the forest department overcome constraints of manpower and a rapid response mechanism involving local volunteers and forest and police is key to effective handling of a situation.

An advisory system to develop public understanding of protection, conservation and legal measures is the need of the hour. Left to themselves, leopards will leave us alone.

7 Apr 2018 - 8:16am | AT News
BOKAKHAT: The forest guards in Kaziranga claimed to have eliminated a dreaded rhino poacher at an encounter inside the national park on Saturday. According to information, the fierce gun battle took...

25 Jun 2016 - 10:58am | AT News
A new satellite news channel targeting the audience of 60 million people in northeast India emerged from the pre-historic city of Guwahati to join in the battle for electronic media space. The News18...