Time to bring work culture back

The Father of the Nation, Mahatma Gandhi had expressed his views on the importance of 'healthy work culture' in the Harijan newspaper of 15th October,1938, emphasizing on hard work by the people of the country for attaining the goal of freedom. He dared to declare that 'declaring his birthday as a holiday should be treated as a cognizable offence'. This was a clear indication that the 'Great Soul' was confident of the might of his people, which later on succeeded in bringing freedom to the country. His experiments on Swadeshi movement brought good results. But it seems that the present situation has completely changed the whole thing and Mahatma’s dreams are shattered.

Unfortunately, with his assassination on January,30,1948, his ideals and teachings were thrown out in the wilderness by the people whom he trusted most.. His followers used his name, teachings and ideals for making wealth and property by playing politics. His soul might have felt ‘tremendous pain’ on the day the Government of India declared his birthday, the 2nd October, as a National Holiday. This decision, ignoring the Great Soul’s wishes, was great dishonor to him. Since that day the ruling parties in the country started distancing from his ideals. No doubt they kept crying for Gandhian philosophy and remembering his ideals at every critical times. Ignoring his sentiments and ideals for long sixty seven years, efforts are on to underplay his teachings and increasing holidays from time to time, with intention to make the people idle by reducing their working capability. It is only in India, where maximum holidays are allowed. The practice of demanding more and more holidays in the industries and offices are continuing regularly. It is unfortunate, when the country needs more work for development and prosperity, our people demand more holidays. More holidays means reduction in working capability of our people. On the one hand, when there is necessity for hard work due to economic globalization to counter the challenges of multinational organizations; our country prefers reducing working ability of our people.

Whereas there is necessity of increasing ‘work culture’ to bring the country at par with developed nations, the tradition of increasing holidays at work places leads to reducing working potential of our people. Politicians and trade unions are equally responsible for this sort of affairs. Mere slogans cannot lead the nation on the path of progress. It needs hard work and foresightedness in planning. Development needs more hard work and fewer holidays. Developed nations increase production by reducing holidays and increasing working hours to increase per capita working capability. In Indian politics there is a ‘conspiracy’ going on to reduce capability of our people. Power hungry politicians having interest in multinational companies are busy to get the benefit out of this practice.

Our trade union leaders ‘mislead’ the workforce over various issues demanding to keep their leadership alive. It is unfortunate; these leaders demand more holidays and other benefits instead of encouraging the workers to increase production, so that the industry is compelled to pay them more. Due to high illiteracy and lack of right understanding, exploitation of workforce is continuing in the country. Working force fail to understand whether their prosperity depends on more work or on holidays. Government of India has adopted the policy of five days working in a week, which ultimately leads to delaying disposal of works. Not only this, out of 365 days of year, about 25 National, 104 Sundays and Saturdays, besides 65 privilege leaves, casual and medical leaves, provisions are already there. In this way about 200 days of the year a worker enjoys as holidays.

The state governments on the other hand declare a few local and festival holidays in addition to all these. Another fact that shows that the ‘bandh culture’ has spread in the country at large scale on various issues and petty matters..Any organization gives a bandh call and it is found that the people give good response to that and enjoy extra holidays. As much misuse and negligence of human resources is done in India, nowhere in the world one can find. Several small nations have attained their position in the developed countries because of proper use of human resources and our  India is lagging behind even after 67 years of independence.. It is not enough to pay homage to the Great Soul by putting flowers on his Samadhi from time to time. It is time to follow his ideals and make the country self sufficient in the fields of agriculture and industries, which can provide work for all and prosperity for the country. With the change of the guards at the top of the country under the Prime Minister Narendra Modi, the people seem to have respite as he has promised all-round development of the country. The time is awaited to see the result.

22 Sep 2016 - 10:58am | Lester Makang
In what could be a departure from the past trends, battle for Naga People's Front (NPF) tickets is likely to be either quite rancour-free or nonexistent, at least in two of Ukhrul's three assembly... 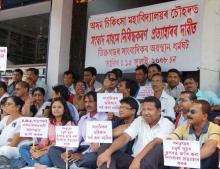