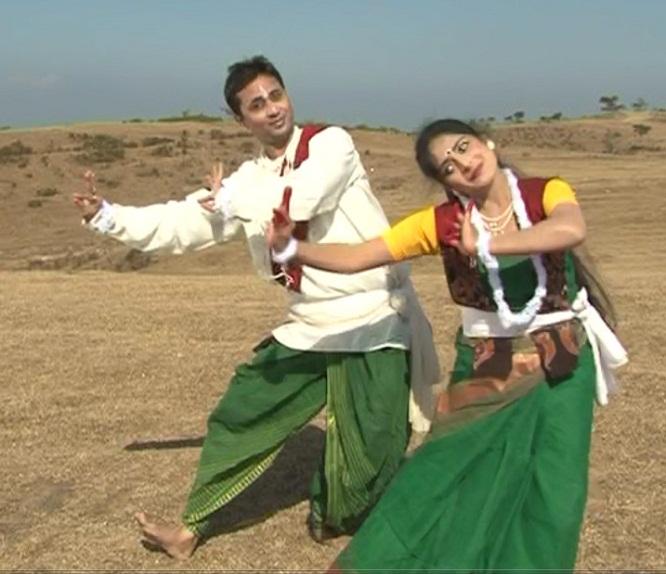 An acclaimed exponent of Manipuri dance and Rabindra Nritya Natya, Nibedita Dey has curved out a niche of her own as an innate danseuse. She is indeed a new promising upcoming artist. Her maiden audio-video DVD – Nrittye Sangeet e Tomaye Pronam – dedicated to Nobel Laureate Rabindranath Tagore on his 153rd birth anniversary was launched at Shillong’s Brookside Mansion by Meghalaya Arts and Culture, Director, MW Nongbri during the recently concluded Rabindra Jayanti. The nine songs, 45 minutes CD – produced by Nibedita Dey Production – was a humble effort by Nibedita and her team to present Rabindra Nritya in its very quintessential form away from the increasing classical lean that is seen today. Ideally this classical lean should not be visibly felt, say experts. She made enormous efforts to brush the nuances of Rabindra Nritya, the sari, ornaments, costumes and the rest of it associated with this dance form, which took her to Shantiniketan – where it was born. With an enduring zeal she managed to meet Basanta Mukherjee – head of Rabindra Nritya at Shantiniketan. Basanta, who lead an intense hectic schedule and is literally beyond the reach of many, reciprocated Nibedita after he came across her natural yearn to learn the nitty-gritty of this dance form. From him, she learnt the various ingredients of the dance – which has otherwise undergone many changes in this era of fusion and remixes – such as the use of ornaments, lip singing essential to create expressions, ghungroo optionally used in Shantiniketan and discard of black color costumes.

A still from a song with young artists

Born and brought up in Maligaon, Guwahati her dance career actually started after marriage here in Shillong. Her five sisters are all artists and she is the youngest among the siblings. She is into dance from a tender age of five learning Manipuri dance under the tutelage of Guru Monishena Singh, Deben Tamuli and Rabindra Nritya from Bagha da, Bhanu da in Guwahati. When she reached standard six, she was sent to a dance school Netaji Vidyapith Sangeet Vidyalaya where she groomed in her line of rendition for about eight years and received Sangeet 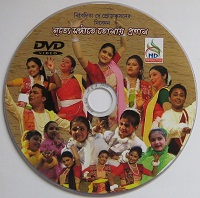 Visharad (graduation in dance and music) from Bhatkhande Sangeet Vidyapith, Lucknow followed by Bangiya Sangeet Parishad, Kolkata but continued Rabindra Nritya lessons under Bagha da. “Manipuri dance was the most sought after form of dances then and I have a natural inclination in it,” she said to why she took to this dance while recalling her late guru Monishena’s influences in the society. She has performed in various prestigious programmes, functions, competitions and even judged dance shows. Her performances in Doordarshan (DD) Guwahati followed by DD Bharati NE Superstar are among the main. In NE Superstar she was invited as a special celebrity to Guwahati where she gave a performance and got an offer from the producer and musician for a career in Mumbai but could not opt due to family compulsions. “I was called for screening. They suggested me to shift to Mumbai because here I won’t get any exposure and scope,” she recalled with a sense of despair. During her graduation days she got dance offers in New Delhi but had to give that up because of her parent’s insistence on studies first. She was even offered a role in an Assamese Telefilm which her parents resisted, too. But she is indebted to her Chordi (middle sister) Shikha Sarkar, who encouraged her and gave initial dance lessons. 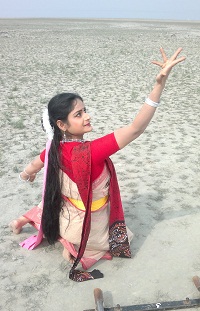 After marriage, her dance career took to new heights and she attributes this to her supportive husband working in the union government. She is a regular artist in DD Shillong now and gives free lessons to young dance aspirants. She also judges dance shows at various education institutions, cultural centers and dance competitions and is doing her D.Ed in tandem. She explained that Rabindra Nritya Natya – which is identified after Tagore’s three dance-dramas – and Manipuri dance, has much resemblance between them. Manipuri dance is an essential skill a student of dance has to have in order to be able to participate successfully in Tagore’s dance dramas, according to traditional Indian classical dance. This was and still is the mode of dance predominantly used to interpret Tagore’s works on dance. The eloquent lyrics of Tagore’s poetry set to his distinctive melodious music requires soft, rhythmic Manipuri dance for its holistic presentation.

She was encouraged and inspired to bring out the CD by a well wisher Pompa Deb and Ramyajit Bhattacharjee – who composed music in the CD. The nine songs is a beautiful rendition of solo, duet and dances combined based on seasons on which Rabindra Nritya is based. The seasonal themes includes puja (celebration), prem (romance), basanta (spring), baul, barsa (rainfall) and more. Nibedita’s daughters – Rinita and Jismita – also performed in the CD along with other child artists Debangshi, Sumedha, Aakansha and others. Among the adult artists are Nibedita (choreography), Debasish Saha, Bikramjit Purkayastha, Shreshta Deb, Rumita Sarkar, Madhushree and others. These artists were chosen from Shillong and Guwhati. The videos were shot in the scenic spots of these two cities. Zee Bangla’s Saregama finalist from Guwahati Sampa Basak, her sister Malabika Basak and Shiva Prasad Sanyal, senior artist, Rabindra Sangeet, Guwahati lend their voices. The music arrangements and keyboard display was done by Ramyajit putting due effort on the deep and pure emotiveness of the songs with support from Alakesh Chakraborty (Tabla), Nataraj Bhattacharjee (Guitar) and active assistance from Sabdarupa Studio. This CD is also serving a noble purpose of prompting local tourism of both Shillong and Guwahati. Sublime hits like “Agnibina Bajao Tumi”, “Chokkhe Amar Trishna Ogo”, “Gram Chhara Oie Ranga Matir Poth”, “Kusume Kusume Charan Chinha”, “Mon Mor Megher Sangi”, “Ami Poth Bhola Ek Pathik Esechhi”, “Pran Chaye Chokhhu Na Chaye”, “Srabaner Gaganer Gaay” and “Tomar Khola Haoa” of the Bard of Bengal coupled with artistry of immaculate footwork and a complete understanding of the dance form by the artists throughout the presentation is fascinating. The immaculate performances by Nibedita, Debasis and other artists can be gauged from their expressive dancing style, a key point in Rabindra Nritya. The scenic Brahmaputra River with the hillocks in the background whereas the rocky greens of Shillong Peak and dense greens of Elephant Falls with the vital facial expressions of the artists is touching. These dancers under the flawless choreography of Nibedita with sublime beauty of the lyrics sung by a neat band of singers emerged into the character of the songs, while maintaining Tagore’s dance visualization with mixing and matching of styles. The scintillating performances by the young artists ensure that there is no dearth of talent in this region.

Nibedita and her team had to face harsh weather conditions in the winter months of January to shoot the songs. The production started last October. “We even had to shoot with a car CD player on the background to create an ambience whereas music composition went till early morning and rehearsals without lunch,” recalled Ramyajit adding that this CD is an effort to keep the originality / tradition of Rabindra Nritya – singing, dancing and music. “We have tried to give a message that today even drums are used in these renditions shifting from the very core,” he added while Nibedita followed that the CD is an effort to make people aware about Rabindra Nritya innately. The video editing was done by Asha Creations, Kolkata where a member of Eipar Opar Bangla on meeting her team invited Nibedita to do their next programme in Bangladesh. A consistent part of Nibedita’s career is that wherever she has performed so far is showered with offers, which undoubtedly confirms her sheer talent. She even recalled an incident when she went to Bangiya Sahitya Parishad, Shillong to register her elder daughter for a dance performance and ended up with her registration too. “My husband told me to go ahead and I gave a performance after handing my younger daughter, in lap then, to an audience member,” she said recalling how people encouraged her to impart dance lessons to aspirants. She has plans to bring out another CD on Chitrangada – one of the three dance-dramas composed by Tagore – and Nazrul Nritya.

What goes wrong with transgender persons

4 Dec 2017 - 10:03am | AT News
GUWAHATI: December 15 will witness a ‘Delhi Chalo’ protest against the centre’s decision to ignore all civil society inputs and table the Transgender Persons (Protection of Rights) Bill of...

18 May 2015 - 9:25am | AT News
Chief minister Tarun Gogoi vows to leave no stone unturned to ensure allround development saying that he is firm on his commitment. In a statement he released on Sunday a day before the end of...

4 Oct 2012 - 8:37pm | editor
Yet another sensation murder rocks Guwahati. A group of dacoits killed a businessman in the city on Wednesday night. The incident took place at Bhetapara area. A few armed miscreants attacked...