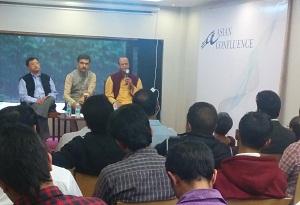 Silicon Valley, which is home to many of the world’s largest technology corporations as well as thousands of small start-ups, located in Northern California precisely the Southern Bay portion of the San Francisco Bay area, has a comparative reference in Bangalore in India – which is called the Silicon Valley of India. This reference to that of the original Silicon Valley in USA is attached to the Southern Indian city because of its status as a hub for IT companies, research and development, electronics and software production. Bangalore is also the ten most preferred entrepreneurial locations in the world. Now whether the North-Eastern (NE) region of India can go nearer to these technical destinations or even become one of them in the long run. Well, nothing is impossible and Mahesh Kanumury, founder and managing director of Arivali Partners, a venture capital firm, specializing in social enterprises benefiting the bottom of the pyramid has a solution to all these.

In an interactive talk held on May 2 at Asian Confluence Centre in Shillong, Mahesh gave an insight on “Social Enterprises: The next destination for entrepreneurs” and how innovation has changed the destinations of Silicon Valley in USA and Bangalore. This interaction is an initiative of Asian Confluence under its innovation talk series. The Asian Confluence is a civil society platform to promote an open space for cultural and intellectual exchanges towards creating better understanding of the NE region of India in the larger context of India as an emerging power in East Asian geopolitics. It is a well established fact that, given the proximity of the NE states of India with the countries of South East Asia, the great biological, anthropological and cultural diversity, and the strategic geopolitical profile of this region, there exists an immense potential for growth and development. The challenges to unlock this growth potential are also manifold, and several governmental initiatives towards this goal are already underway. However, the role of civil society in forging an environment, conducive to growth, is a factor that has assumed great importance in recent times and one which cannot be overlooked and the Asian Confluence has taken this onerous task of cross-cultural engagement under the supervision of its director Sabyasachi Dutta – who has worked in reputed MNCs in USA before starting this initiative.

Speaking broadly on this region, Mahesh said that to implement small ideas at the micro level can be a good idea here. “Even Silicon Valley in USA, which is known today world over as the ultimate technical destination, does not have a market of its own, but what made it what it is today is because of innovation,” he said. How can NE utilize these innovations? “For this region to truly make its mark and differentiate itself, it should be a test-bed for innovative companies. The regional governments should encourage and provide a necessary coordination and infrastructure for these companies to test and market their products and services,” he said while reasoning that on their own companies won’t come here because the market is limited. Mahesh was a General Partner at a $260Mearly stage venture capital fund based out of the Silicon Valley where he invested and successfully nurtured the growth and successful exit of several companies.

He gave several “out of the box” innovations happening in the country today that were never heard or seen before and their applicability to improve human lives through social entrepreneurship is the new revolution that is doing well in the country. These breathtaking innovations, which are shaping humankind at their backyards, are the brainchild of Indian entrepreneurs – who are in no way behind the best in the world. He gave several examples about innovations where the rural poor are provided with an opportunity to save their money in banks which they could never think of earlier. We have all heard about chit fund companies making huge collections from the rural people by luring them with higher returns only to deceive them at a later stage. But how about banking services right at their doorsteps where these poor people can safely stack their income without any fear of the agents running away with their money. Mahesh said that the idea is to provide banking services to interior rural villagers who are far away from regular branches through a combination of mobile technologies and companies enable Kerana (general) shops as bank extension counters. For simple banking transactions, customers walk into the store where a finger print authenticating machine is installed which authenticates the identity of a customer. Then the Kerana shop owner types the transaction in a mobile phone screen, say in case of cash deposits, and immediately the customer’s account is updated and an infra red printer, attached to the counter, prints a receipt. The same procedure applies in case of withdrawing money. From deposits to withdrawal can be done easily whereas the Kerana shop owner has to maintain a security amount with the bank as his shop acts as a bank. For this act of the shop owner he gets a commission for every transaction. So with this innovation the company is fostering savings habit among the rural poor. “This service is in effect in some parts of Meghalaya and other states in the country,” said Mahesh.

Another astounding innovation is the low-cost housing. We all know that property is immovable but that concept has changed now as a particular company has come with an idea to make readymade precast homes welded up to a size (600sq.ft. onwards) which are later fixed in the rural belts. One such company is already in this trade in Karnataka but the only drawback of this innovation is that once manufactured the houses cannot be altered / renovated. Kanumury said that these houses are much better than normal houses because of their better structural properties and immaculate finishing. This innovation is a noble idea which can be adopted by civic bodies and state governments to provide rural housing infrastructures to poor under government schemes.

A very unique disruptive patented innovation is nano-technology based nutrient that has shown remarkable results in fields which include significant increase of yields, reduction of pesticides and fertilizers and increase in the quality of produce. “This disruptive technique can create far reaching impact especially to small and marginal farmer and improve the quality of the soil which has been degraded with the use of excessive chemicals and fertilizers,” said the Harvard management graduate. Mahesh, who also holds a BS in engineering from IIT, Chennai and MS in engineering from Purdue University, further said that this particular technology is disrupting conventional agricultural wisdom in a number of dimensions. “In tea plantations the recommended zinc is 8 to 12 kg per hectare whereas in nano-technology, we might require only 0.2 to 0.3 gram zinc which has shown equivalent or better results. Secondly, several ginger farmers have experimented use of nano-nutrients with and without application of fertilizers and have found higher yields when fertilizers were not utilized,” he said.

He pointed that India has massive problem of arid lands and fuel. But there is a technology that can solve the problems is the commercial growth of Pongamia plantation. “Pongamia, hardy plants, grows in dry and arid lands, and its fruits can be crushed / refined to generate biodiesel, which can be put in diesel engines and the pulp can be used as bio-fertilizer and bio-pesticides. The entire process is net-carbon nutrient, no net-pollution in the air,” he said adding that these plants have the ability, over 15 to 20 years time, make the soil fertile. “So farmers’ can increase their incomes by 5 to 10 times by planting these trees, with environment benefit, farmer benefit and company benefit,” he added.

Mahesh’s focus areas are the rural economy and clean energy and he is already working in Meghalaya and Tripura in the NE region. One of the important facets of his style of working is that he closely works with entrepreneurs to help their organizations grow while impacting the lives of people. Some of the sectors that he has been involved with include nano-nutrients for agricultural productivity, micro-finance and livelihood promotion, agricultural lending using cooperatives, financial inclusion for the rural poor, low-cost housing, agricultural production in Africa, bio-fuel plantations in arid lands, on-demand hydrogen for remote distributed power, social venture and debt funds. He has also worked at Mckinsey in the US where he led a number of high-impact initiatives at the CXO (Chief Experience Officer) level. Three of his studies have been stories at the prestigious Wall Street Journal. He enjoys running, music and meditation.

8 May 2011 - 12:24pm | Anup Biswas
Even after 64 years of Independence, the Jinamghat village located in Jinam Valley constituency of Dima Hasao Autonomous Council is yet to see the light of development. The...

5 Oct 2008 - 3:58pm | bobbyramakant
India is reeking under increasing communal polarisation and urgent steps to check it are warranted. Between 24 August and 2 October 2008, more than 300 villages in 14 districts of Orissa state were...