Rangia sub division in Kamrup district has become tensed following a murder case took place at Kendukona under Kamalpur police station. Thousands of people blocked NH 31 at kendukona on March 2 demanding immediate arrest of persons involved in the case. According to police, an youth namely Putul Ali (30) was badly beaten by a group of local people suspecting him as a thief. Later putul died on his way to Hospital. Following the incident local people became violant. Finally the mob of local people blocked NH 31 and demanded justice. Local people have demanded immediate arrest of 6 accused of the case. A murder case under section 302/34 has been registered at Kamalpur Police station. Senior administrative and police officials have rushed to the spot but the situation is yet to be controled.

17 Sep 2017 - 8:05am | AT News
Vishwakarma puja festivity grips Assam on Sunday across the state where the god of construction is being worshipped with much religious fervour. Factories and industries, technical... 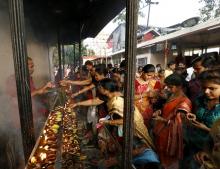 26 Jun 2014 - 7:48am | AT News
Ambubachi has come to an end on Thursday morning.  The doors of Kamakhya temple now is open for the devotees who came to the Nilachal hilltop 4 days back to attend the Ambubachi mela...