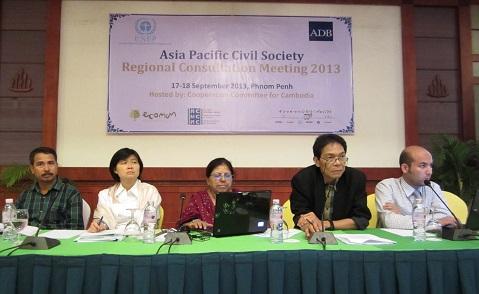 The UN Post 2015 Agenda on Sustainable Development would include important points raised by civil societies of Asia and Pacific region, Chandan Kumar Duarah, a journalist and activist from Assam said on Tuesday. United Nations Environment Programme (UNEP) assured to include some important suggetions in the new agenda to address major issues of Assam as well as the north-east Indian region, he said. Duarah opined that the approach of to the Post-2015 Development Agenda and Sustainable Development Goal must create a constructive path to addressing environmental justice and civil societies emphasize it. The issues include climate change, industrial destruction, waste and health problem, land grabbing, human rights violation, militarization and violation of rights of indigenous people. Duarah was invited to this meeting and as a panelist and his topic was "Access to Information, Public Participation and Environmental Justice" in the session of Rio+20 Outcomes and Principle 10.

Representatives from 23 countries in Asia and the Pacific attended the the Asia Pacific Civil Society Regional Consultation Meeting 2013 endorsed some recommendation as necessarry steps towards achieving environmental sustainability. They assembled in Phnom Penh, Cambodia on  September 17-18, 2013. The officials from United Nations participated the UNEP's Consultation Meeting organised by Asian Development Bank, Satagoeri Project and Ecomom Korea and hosted by the Cooperation Committee for Cambodia (CCC). The meeting focused on environment sustainability in the post 2015 development agenda, regional priority and emerging issues in Asia- Pacific region, role of major groups and stakeholder's engagement and transperency.

Launched on May 31, 2013, the consultation gathered critical analysis from civil society on the UN post 2015 development agenda. This report, presenting recommendations from regional civil society networks will be delivered to the Head of the UNEP as well as UN.

28 Apr 2017 - 7:50am | AT News
The city based Dispur Hospitals will conduct the next evening OPD clinic at Guwahati Press Club on 29 April. Dr Udayan Saikia from the acclaimed hospital will be available for free consultations to...

19 May 2015 - 6:16pm | AT News
The Upamanyu Hazarika commissio set up to study to progress of the border fencing visited river fronts in Dhubri district on Tuesday. Accompanided by senior district administration officials the...

16 May 2008 - 12:08am | editor
Players of Guwahati and Hojai seen in action during the inaugural day of the All Assam Inter District Hockey Tournament held at Tezpur District Sports Association in Tezpur on 15-05-08. Pix by UB...