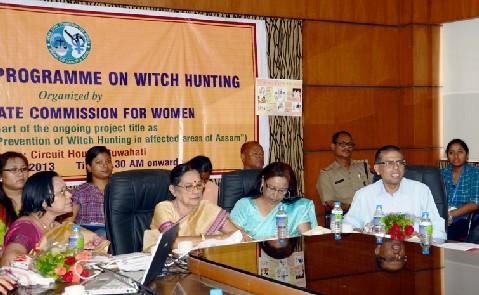 The Assam State Commission for Women (ASCW) organised a state level sensitization programme for police personnel seeking for intervention and prevention of witch hunting in affected areas of Assam on Friday.

In his presentation Addl. Director General of Police, Mukesh Sahay added that witch hunting is a prevailing problem not only in Assam but also in rest of the States such as Madhya Pradesh, Andra Pradesh, Jharkand and many more. He added that the civic society has a large role to play in pointing out the vulnerable area to the police so that necessary actions may be taken.

The ADGP told the police personnel present, “Police has every right now to arrest on the basis of a complaint or information or reasonable suspicion in respect of a cognizable offence. In any suspicious case as such immediate actions may be taken before commencement of further procedure”.

Meera Barooah, Chairperson of ASCW shared that in order to overcome killing of women, men and sometimes the entire family and various other incidents in matters relating to witch hunting the Commission has laid down some goals and objectives. Commission had undertaken to create awareness by encouraging education and health and socio economic development programmes. Vigilance committees in villages are set up so as to monitor such evil practices.

27 Jan 2014 - 8:06pm | AT News
The deadlock over water supply dies down. The agitating workers would resume duties from Tuesday morning. The decision was taken following the assurance of public health engineering minister Dr...

14 Oct 2007 - 5:39am | pbaruah
Army’s crackdown against United Liberation Front of Asom (ULFA) is all set get more teeth.According to information, newly appointed Army Chief Staff Deepak Kapoor will hinder down with Army...

29 May 2014 - 11:00am | Jintul Talukdar
In a bizarre incident that sends shocwaves across the state, a villager lost his life at the hands of his wife and son in Barpeta district on Thursday. The incident was beleived to have taken place...