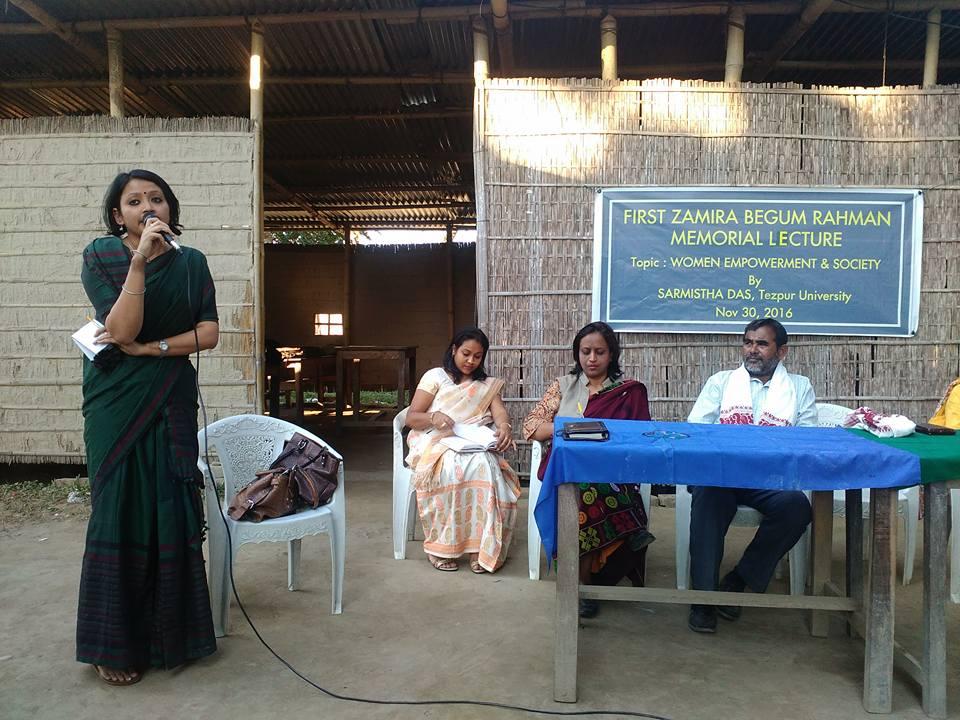 The First Zamira Begum Rahman Memorial Lecture on the topic “Women Empowerment and Society” was delivered by Sarmistha Das, Assistant Professor, Department of Sociology, Tezpur University at a rural school, Kabilabad HE School in Tezpur recently. The lecture was attended by over 250 students of classes eight to ten including the teachers of the school.

Sarmistha Das, who has been teaching Sociology at Tezpur University for the past six years delved into different aspects of women empowerment with vivid experiences from her own life. She recalled her mother’s advice, “Whatever you do in life, you should always have a choice in hand. And that is possible only if you educate yourself and know what is right and what is wrong.” She said that her mother gave her the freedom to do whatever she wanted and that empowered her. Das spoke about Malala Yousufzai who got the Nobel Prize for Peace. Malala overcame such social pressures to pave the way not only for her own education but for other girls like her as well. In that sense, she is extraordinary. She said that many girls drop out of school for various reasons like lack of toilets or early marriage.

Das also emphasised on the role of men for the empowerment of women. She emphasised that women empowerment is not a women-centric issue. A society can progress only if a man and a woman walk hand in hand. She urged the children to read books and watch good films. It is important to have a dream and create a stature for oneself so that a woman is heard at all levels.
The memorial programme was conducted by Nayama Ahmed, Assistant Jailor, Tezpur Central Jail. Ahmed reiterated that women empowerment is a process where we try to discover ourselves. She said, “The mother is the pivot of the family. If she is educated, she can take the right decisions which includes political and economic decisions.”

Nazia Sultana, Television journalist and social activist introduced Late Zamira Begum Rahman to the students. Late Rahman was an educationist who was born on Dec 10, 1946 in Shillong. After completing her BA (Hons) in Education from St. Mary's College, Shillong in 1965, she did her BT from Gauhati University in 1967 from the Post-Graduate Training College, Shillong. She started her teaching career at Laitmukhurah Shishu Vidyalaya from 1965 to 1970 and then taught at Loreto Convent, Shillong from 1970 to 1972. Then she joined Sumer High School, Meghalaya as the Headmistress in 1973 where she had worked for 12 years. Later, she shifted to Guwahati and joined CTPS High School, Chandrapur, Assam.

“She loved children. She is still remembered for her kindness. That is why we thought that the best setting for a commemorative lecture in her memory would be a rural school,” said Teresa Rehman, her daughter who is a journalist.

The introductory speech and the vote of thanks were delivered by Mahmuda Aman Haque and Joyshree Chakravarty, two students of the school who are also the office bearers of Kanaklata Girls’ Club in their school. A one-minute silence was observed to pay tribute to Late Rahman. The Principal of the School, T Khan who chaired the session urged the students to overcome myths and obstacles and learn to be strong citizens and help in taking the nation forward.

Rupjyoti Gogoi, Assistant Professor, Department of Physics, Tezpur University also spoke on the occasion. Gogoi said that she too was not born with a silver spoon in her mouth and studied in a similar government school. She said, “She said that a mere colourful degree will not make you empowered. We have to attain knowledge and wisdom and grow as good human beings and share our enlightenment with the world. We should come out of the orbit of being somebody’s wife, mother and daughter. It is important to carve a niche for yourself by nurturing your strengths and talents. One’s identity is one’s ornament.” The programme ended with the rendering of “O Mur Apunar Dex”, the state anthem of Assam.

21 Jun 2016 - 8:43am | AT Kokrajhar Bureau
Police arrested two Ganja smugglers along with seized of Ganja from Duturi area under Bijni PS in Chirang district late last night. According to police, the smugglers were arrested along with Ganja... 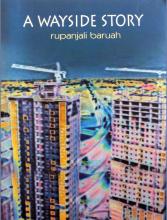 11 May 2016 - 10:55pm | Syed Miraz Ahmed
WordSmith Publishers, Guwahati, Sunday hosted the launch of “A Wayside Story,” a novella by writer-author-painter Rupanjali Baruah at the 122 year old Guwahati Club premise. In a bid to do away with...