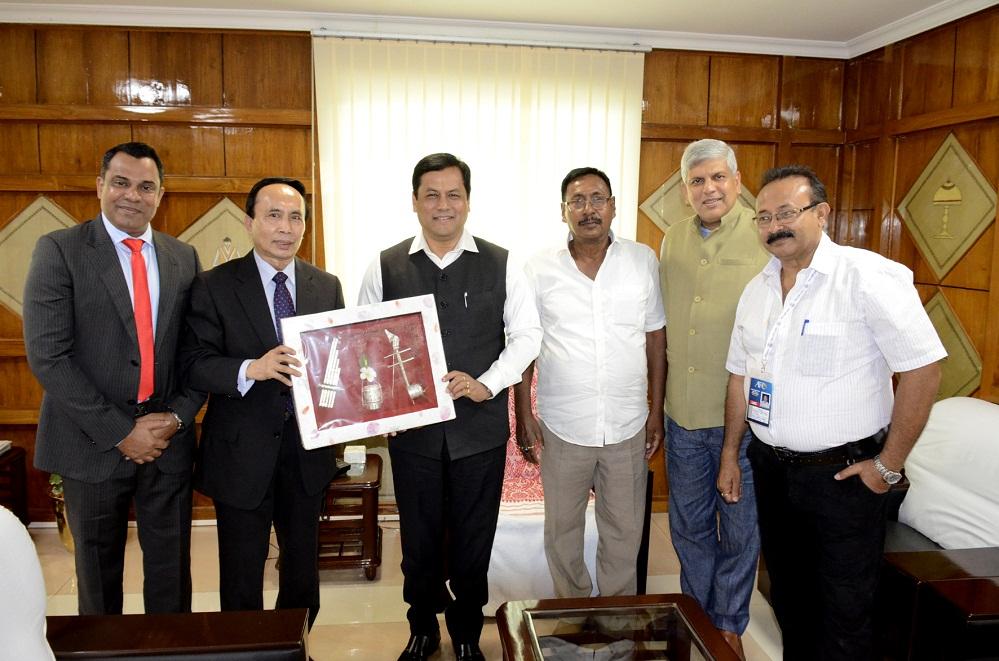 Laos PDR Ambassador to India Southam Sakonhninhorm and Indian Ambassador to Laso Ravi Shankar Aisola who met Assam chief minister Sarbananda Sonowal during their visit to Assam, have expressed hope of a bright future between Laos and India especially Assam.

“We have a very fruitful meeting with chief minister Sarbananda Sonowal. He was very kind to listen to us,” said Sakonhninhorm.

He said that it was the people to people connectivity which will eventually have a better relation between the two countries. Sakonhninhorm also advocated for enhance of cultural exchange and tourism and business.

“We need to go ahead step by step with very concrete developments,” Sakonhinhrm added.

Terming the long 59 years of diplomatic relationship between Laos and India as cordial, Sakonhninhorm said there was enormous potential for investments in various sectors as both the countries are ASEAN members. The Ambassador said that Laos was keen to invest in tourism and mining sectors in which Assam has enormous potential. In course of the discussion, Sakonhninhorm extended invitation to the Chief Minister Sarbananda Sonowal to visit Laos.

He also appreciated the works of Assamese businessman Habib Chowdhury for his work in Laos and his efforts to better the ties between the two countries.

Chowdhury is the founding chairman of HSMM Group that has become the largest Agarwood and Agar based Product’s Company in South East Asia from a humble background in Assam. It is Chowdhury’s initiative to invite the envoys of the two countries to Guwahati.

“Northeast of India has a very important and strategic location. Nestled between Bangladesh, China, Bhutan, and Myanmar, it is ideally positioned for trans-border trade. Moreover, the neighbouring ASEAN region is one of the most dynamic economic regions of the world today. The ‘Act East Policy’ of our government offers a huge opportunity to transform the whole economic landscape of this region,” said Chowdhury who is also the sponsor of Laos National Football team.

Meanwhile, Indian Ravi Shankar Aisola said that with the better connectivity is the main area which will drastically improve the ties between India and Laos.

There are some beautiful places which are yet to be explored. I have a fantastic experience staying in Laos. It always feels like staying at home. It’s an extremely safe and secure place. There is no law and order problem. The people are so polite that they don’t even speak up. You can go anywhere in the middle of the night. Though the food habits are different, the weather is similar. We are extremely comfortable. It is called the hidden jewel of South East Asia,” Aisola who has been served as an ambassador to Laos since August 2015, said. (ends)

29 Jul 2015 - 6:30am | AT News
Assam is known for its highest power tariff structure where the consumers have been bearing the brunt. This was what FINER has observed when it welcomed the move to revise the structure for 2015-16....

Flood threatens to wash out Kaziranga

25 Jun 2012 - 4:26pm | editor
Kaziranga National Park is reeling under devastating flood wave forcing the birds and animals to leave the famed site. Animals from the world heritage site is moving to highlands. But the situation...