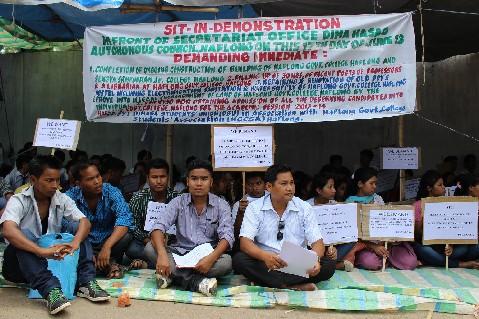 Dimasa Students Union along with Haflong Govt Collelge Students Association organised a sit-in-demonstration in front of the Secretariat Office, N. C Hills Autonomous Council on Monday demanding solutions to various burning problems of the students' community in the district. More than 300 students were denied admission into Haflong Govt College this year due to lack of seat in the institution.

After three hours of sit-in protest in front of the council office, Mr. Thalendra Debragede, the president of DSU submitted a memorandum to Shri Hitendra Kr Baruah(ACS), Principal Secretary of N.C Hills Autonomous Council, and requested him to look into the genuine problems faced by the students community in the district.

Mr Debragede also expressed his concern about the future of young students of the district who's career would be at stake if the authority fails to arrange necessary infrastructure and teaching staff in time. He also stressed on a need to set up a new degree college in the town.

Pointing out the problems currently faced by the students of Haflong Govt. College and Sambudhan Jr College, he said that the ongoing building construction in both the colleges should be completed immediately so that additional number of studenst may be admitted without any further delay.

The various demands of the memorandum include filling up of 30 vacant posts of teaching staff and a librarian in Haflong Govt College; immediate renovation and repairing of old Boys Hostel; better sanitation and water supply to the college; probe into illegal encroachment of college land, and admission of all deserving students into the college for the academic year 2013-14.

JNH appeals for peace in BTAD

31 Jul 2012 - 2:33pm | Anup Biswas
The Jadikhe Naisho Hoshom(J.N.H), the Dimasa Apex Body Central Committee, Dima Hasao Haflong extended its heartfelt appeal to all the people living in B.T.A.D area to stop Violence of any kind. Such...