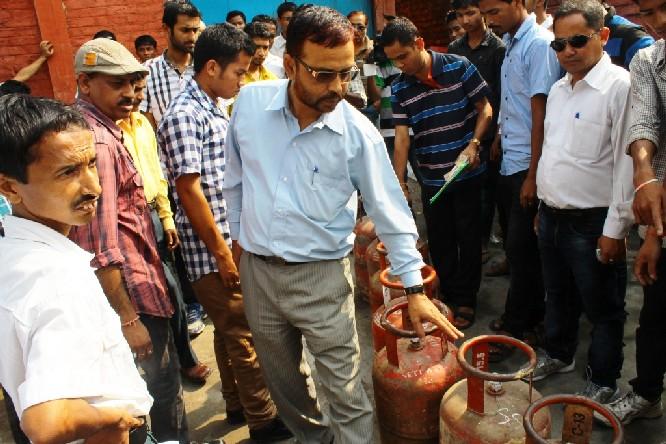 A team comprising of citizens and members of Golaghat unit of All Assam Students’ Union visited Industrial Estate of Jonaki Nagar here today and were stunned on seeing the large scale encroachment being carried out by some unscrupulous businessman. The team also noticed that most of the tradesmen have converted the industrial estate into residential block by constructing concrete structures. Some of them have even projected their dysfunctional units as functional in a bid to encroach the land. At the same time, the team had also seized nine nos. of domestic LPG cylinders, ten bags of inedible flour and three tins of adulterated mustard oil from M/S Devi Food Products situated at the industrial estate owned by local trader Uma Gupta and handed over to the officials of food and civil supply in presence of magistrate. In a press release the student body have demanded a high level probe into the land allotment in the industrial estate since 2004 and to bring the culprits to the book. It is to be noted that the total land area of the industrial estate is 55 Bighas 07 Lochas and out of which 27 Bighas of land have been occupied by Central Reserve Police Force since a long time.

8 Mar 2008 - 3:51pm | Nagendra Sarma
After a series of attack on the Hindi speaking people and carnage in the different parts of Assam last year allegedly by the cadres of the 28 Battalion the Army deployed in the state under Unified...

5 Feb 2014 - 10:09am | AT News
The Congress legislative party is holding a crucial meeting in Dispur today to fine a slew of strategies to ensure smooth passage of two Bhubneswar Kalita, Dr Sanjay Sinh and Biswajeet Daimary in the...

29 Jul 2013 - 11:03pm | Abdul Gani
The Additional District Magistrate of Kamrup (Metro) has promulgated Section 144 for safety, security and maintenance of public peace and tranquillity. In view of the above, riding of more than one...