‘Majority of the four lakh displaced people of July 2012 violence in Bodoland did not return to their homes apprehending fresh attack from miscreants of rival communities due to burning of their houses’, said Prof Vipin Kumar Tripathi of IIT, Delhi and a social activist, after his three days tour to Kokrajhar and Dhubri districts.

Speaking to media persons at Guwahati Press Club on October 10, 2012, Prof Tripathi gave a brief description of the prevailing situation in the strife torn areas of Bodoland Territorial Autonomous District (BTAD). He said that during his contacts with the affected people in the relief camps at Khargaon, Bhotgaon and Bilasipara etc, he came to know the plight of the people taking shelter in the relief camps. The victims gave very sad picture of the relief provided to them by the government in the camps. They alleged that neither the government had given the compensation to those whose houses were burnt by the miscreants nor it made shift shelters. He alleged that the reason behind it was the faulty and unjustified process of identification of victims. He suggested that the identification of displaced people should be done through village panchayats, as it is done throughout the country. Here, in the BTAD, it is being done by the District Administration (under District Commissioners), who have been asked to prepare and submit the list of land owners to under the BTC. After they submit the report, the BTC disagrees to it.

Prof Tripathi said that a large number of landless people in the villages reside in huts, having no revenue records. For them the voter’s card, ration cards or entry into the birth/death register of the village should be recognized as proof of identity. Any further enquiry could be held in case of suspicion after the people return and situation improves and peace prevails.

The people who have returned to the villages have no work in their villages. Those who used to go to Kokrajhar for work are now scared of going there. The MNREGA could help them but that is hardly functioning, he added. Unlike other parts of the country, where it is operated through village panchayats, here it is operated through Village Council Development Committee (VCDC) - a body nominated by the BTC, said Prof Tripathi.

It may be mentioned here that Prof Tripathi during his earlier visit to BTAD from August 2-5, 2012 found that neither Bodos nor Muslims appeared for the evidence. A few miscreants, especially the gun wielding ones carried the killings and spread terror. These elements must be overpowered and their arms confiscated, he suggested. He also found that there was no trace of any foreign national angle to the conflict as systematically and vigorously propagated by a few political parties. This propaganda is dangerous, he warned.

Sharing his experience during his two visits to BTAD, Prof Tripathi said that due to increasing activities of corporate world over land and forest the laborers, agriculturists and ethnic tribes are badly affected, and it is time when they should unite. During recent violence more than 77 people lost their lives, several missing and more than four lakhs became homeless. Schools are converted into relief camps. Government is distributing some rice, pulses and oil etc; and other necessary articles are provided by Non Governmental Organizations (NGOs). Condition of relief camps is very bad. Several people have died of diseases and lack of treatment.

24 Jun 2017 - 12:05pm | Shajid Khan
The dip in overall pass percentage of all the three streams – Arts, Science and Commerce in  the 2017 HS  examination conducted by the Assam Higher Secondary Education Council has resulted... 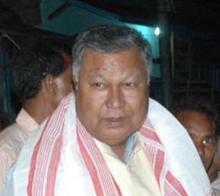 2 May 2017 - 7:54pm | AT News
Senior Congress leader and former minister Bijit Saikia is dead at the age of 78leaving a pall of gloom in the state’s political scene. Saikia, who was a minister in the Hiteswar Saikia cabinet died...