12 Apr 2008 - 3:32pm | editor
An NDFB cadre was killed during an encounter with police in Diphu early this morning. According to information, a few NDFB cadres were coming for extortion while police also were waiting near D S... 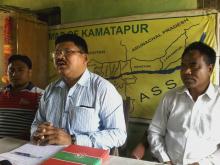 20 Jan 2014 - 7:53pm | AT News
AASU and Asom Sahitya Sabha have vowed to jointly fight for restoration of Assamese as the official language in the state.The resolution got its final shape when the student leaders held a crucial...