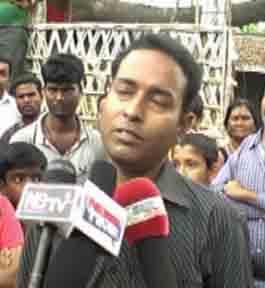 Ultimately, the Dr Rajib Mitra, a railway doctor of Lower Haflong Health Unit landed in police custody following a FIR lodged by the businessmen of roadside market of Lower Haflong on Tuesday night. Dr Mitra is remanded for two days police remand and he will be produced in the court. A non-bail able case has also been registered No 50/2013 u/s 387 IPC U/s.

Superintendent of Police when contacted said Dr Mitra has been charged with extortion and other cases.

There has been allegation against Dr Mitra that, he taking the advantage of being railway official has allowed outsiders to construct house in the railway land with transaction of money even after eviction of retired poor railway employee who had lived there for several years while serving in the medical department, this was confirmed by one Fazir Ahmed Laskar, who now owns the land and house. Dr Mitra also allowed one couple to stay in railway quarter No EM/18B of Medical department at Lower Haflong who is running a ‘chanachur and dalmoot’ factory in this quarter for his business. The people argued when the retired railway employee cannot stay in the railway land how could people from outside be allowed to construct house in the railway land.

Interestingly no local railway officials at Haflong seen to come forward in regards to the arrest of Dr Mitra.

The people of Lower Haflong who were literally harassed by the Doctor in many way has breathed sigh of relief following the action taken against Dr Mitra and said that this doctor has created havoc at Lower Haflong directly and indirectly. They also there have been many more allegations against him but the people here were quite fearing of reprisal, since he has been allegedly maintaining unholy nexus with some antisocials.

29 Aug 2011 - 11:38pm | Ritupallab Saikia
As per the notification issued by the Hon’ble Gauhati High Court to hold Holiday Courts with the objective of improving the justice delivery system and to increase the number of Court working...

29 Jul 2015 - 9:09am | AT News
There seems to be no respite from sweltering heat that disrupts normal life across the state on Wednesday.  Wednesday morning started at 29 degree Celsius and it the figure has gone up to 35 at...