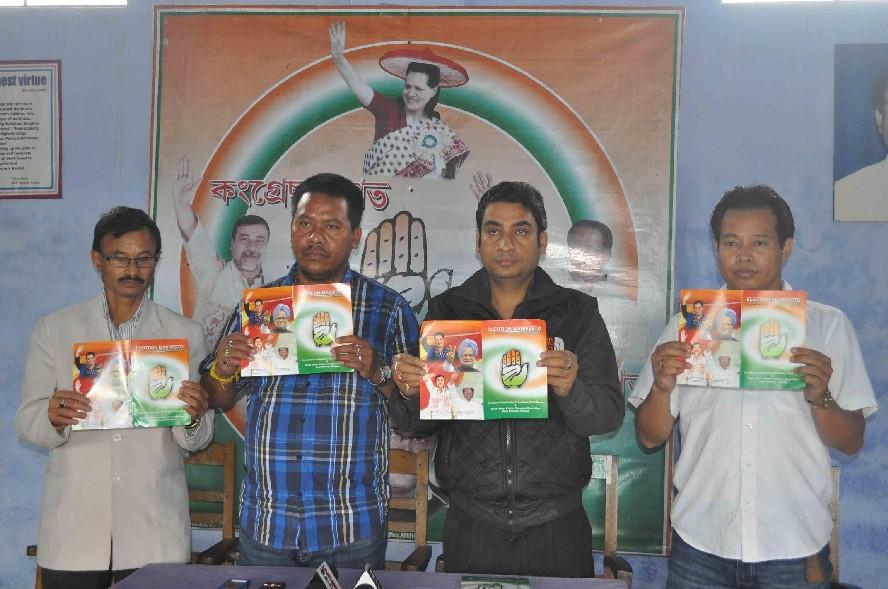 It is stated in the manifesto that with the restoration of peace after protracted spectre of violence in once trouble-torn Dima Hasao district, as a consequence of peace process and the subsequent signing of Memorandum of Settlement (MoS) by the UPA ruled Central Government, Congress-ruled State Government and both the factions of the Dima Halam Daogah (DHD), people belonging to different ethnic and tribal groups as well as the non-tribals have been looking forward to the ushering in of brighter and happier future. Their sole desire is to see that development gets a new dimension and direction. They want peace and harmony different communities and ethnic groups living the Indian National Congress (INC) party ruled North Cachar Hills Autonomous Council has been making all-out efforts to provide a strong and efficient administration for the last two and half years.

Indian National Congress party is fully committed to continue fair and transparent administration and governance in the interest of all the ethnic and tribal groups and communities living in the Dima Hasao district. Hence, we place hereunder The Manifesto of the Indian National Congress Party for the ensuing Elections to the 11th North Cachar Hills Autonomous Council. We are fully committed to implement this Manifesto, if voted to power. Therefore, we earnestly appeal to the people of the Dima Hasao district to cast their valuable votes in favour of the INC candidates (List given in the back inside page of this Manifesto) for the continuity in the development as well as for giving us a chance to rebuild Dima Hasao district as one of the most peaceful and developed districts of the country.

Warisa talking to media persons said major thrust would be given in revenue generation, communications, medical, water supply and so on. He also said Chief Minister Sri Tarun Gogoi and APCC President Sri Bhubeneswar Kalita are coming to campaign in favour of Congress candidates from May 15 next.

6 Apr 2022 - 6:59am | Jahir Ahmed Barbhuiya
Hailakandi: Mohanpur Hospital Chattar on Monday became the scene of mass protests against the recurrence of such incidents at Mohanpur CHC Hospital and the negligence of the doctors and nurses of the...

26 Dec 2014 - 7:33am | AT News
Normal life comes to a grinding halt on Friday following the 12 hour statewide bandh in protest against Adivasi carnage and police firing in Sonitpur district.Roads across the state are deserted as...