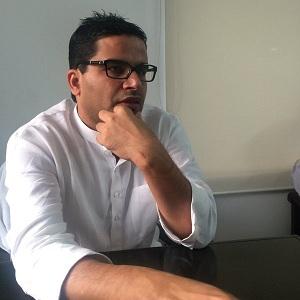 Much to a major boost for Congress in rank and file in Assam, Prashant Kishore has agreed to help the ruling party in the assembly polls March next year.

The brain behind the grand alliance in Bihar, who held a round of informal talks with Chief Minister Tarun Gogoi recently, left New Delhi for Guwahati on Thursday afternoon.

Sources told Assam Times in New Delhi that the poll Chanakya will hunker down with Tarun Gogoi and Rahul Gandhi on Friday to finalise the pre poll strategy when the Congress vice president will on a two days visit to the state on Friday.

"Gogoi recently talked to Prashant at the instance of Rahulji who agreed, in principle, to help Gogoi retain the power in Dispur," said a senior AICC leader.

Permalink Submitted by Sujit Ranjan Kashyap on Sat, 12/12/2015 - 14:16
I would like to join AT NEwS. I like very much this electronic media group. I wish a bright future for AT NEWS.

Fishing on the highway!

18 Mar 2018 - 11:31am | Mithun Baruah
MARGHERITA: In a bid to highlight the pathetic plights of the National Highway No 38 in Margherita many local residents living on the roadside resorted to mock fishing and cultivation Saturday....

20 Dec 2017 - 8:34pm | AT News
GUWAHATI: A special CBI court in Guwahati on Wednesday remanded Rajesh Dhawan to two days CBI custody who was arrested on Tuesday night. An eleven member CBI team has been interrogating the...