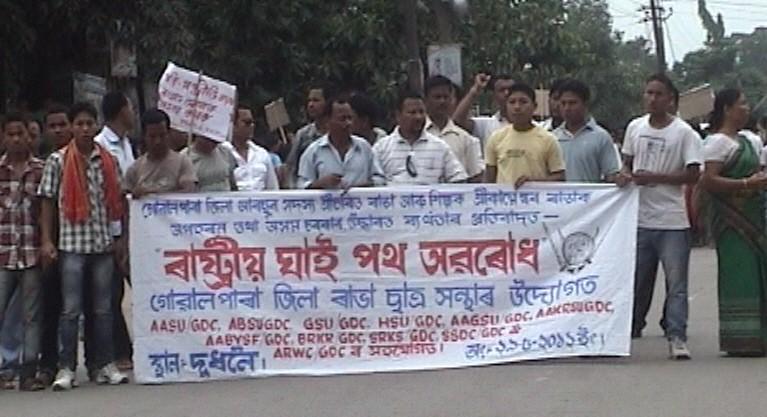 Hundreds of vehicles destined to Guwahati and Goalpara as well as to Meghalaya were left stranded at Dudhnoi in Goalpara district along the National Highways 37 and 62 following road blockade n Wednesday by various students organisations led by All Rabha Students Union (ARSU) demanding immediate release of the two abducted teachers. Thousands of youths from All Rabha Students Union, district committee of AASU, Bengali Youth Federation, AKRSU, Gorkha Students Union, ABSU and many others blocked the roads at Dudhnoi Chariali for two hours from 11 am.

Meanwhile, Goalpara DC, Pritam Saikia and Goalpara SP Luis Aind, arrived at Dudhnoi and assured the agitators that the culprits behind the abduction of the two teachers would be nabbed within seven days. It may be noted here that two teachers, Kameswar Rabha and Sarit Rabha were kidnapped by suspected militant group. Later, while talking mediaperson, Tankeswar Rabha, president of ARSU, alleged that the district administration has failed in tracing the abducted duo due their negligence. He also said that if the two teachers were not rescued within the specified time given by the administration, more agitation programme would be carried out in coming days.

19 Sep 2014 - 8:09pm | AT News
Journalists’ Forum Assam (JFA) has expressed serious concern at the recent threats to cartoonist Champak Barbara, who is engaged with The Assam Tribune group of newspapers, by a miscreant. It is...

27 Oct 2015 - 9:13am | AT News
In yet another blow for Asom Gana Parishad, Sootea MLA Padam Hazarika is joining BJP on Tuesday. Hazariaka, the fourth time MLA is welcomed at a function by state unit president Siddharth...