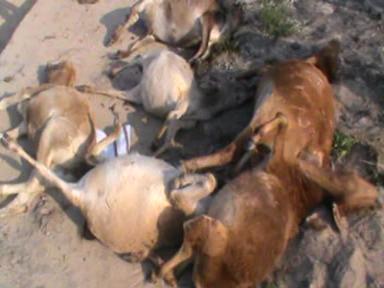 Alt least 17 cows including calves were killed when a passenger train ran over them near Dhanubhanga village, about 10 km from Dhupdhara in Goalpara district, on Sunday afternoon. The tragic incident occurred on the Guwahati Bongaigaon railway track in Dhanubhanga-Letekupara area. The animals, after grazing at the nearby agriculture filed, were crossing the rail track to return home when the incident happened, local sources said. "We are poor people. The cows were our livelihood sources," one of the farmers and owner of the killed cows said.

Victim of terrorism - the common man

17 Sep 2008 - 7:17pm | editor
Recently I had the privilege to hear Mr. Ajit Sahi, the Editor-at-large of Tehelka, speak on the 'Myth Of Terrorist Organisations - SIMI fictions'.His painstakingly collected and carefully analyzed...

17 Sep 2008 - 3:32am | Nanda Kirati Dewan
The 13-member Women National Boxing team was named this evening by the Indian Amateur Boxing Federation (IABF) to represent India at the 4th Asian Sr. Women Boxing Championship to be held at Guwahati...

27 Sep 2017 - 9:32pm | AT News
Two NSCN(K) rebels are believed to have died and several others sustained injury as army claimed to have launched surgical strike against trouble mongers along the Indo-Myanmar border in Nagaland....