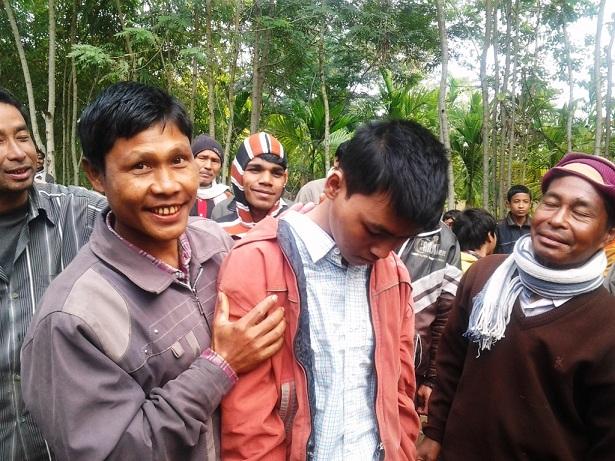 Merapani, the small border town nestled in the Assam-Nagaland Border in Golaghat district has curved a niche for itself as hub of controversy and mystery. Be it inter-state border tension or social issues Merapani always finds mention in the headlines. This time Merapani is in news for something very mysterious and unusual. Four youngsters Dibedhar(20), Moniram (18), Nirada (15) and Haren (12) all siblings born of Purneswar Sonowal and Anima Sonowal have been leading an unusual lifestyle that reminds one of the primitive cavemen. They avoid daylight like sin and prefer to stay indoors. They have built their own exclusive world within the four walls of their humble hut. They can be aptly called nocturnal creatures because when the darkness engulfs the world, they venture out of their hut. Such unusual and mysterious activities of these four siblings have raised great curiosity and many questions among the people.

When this correspondent arrived at their home at Betonighat in Merapani we saw a large gathering of inquisitive people in front of the home. The scene inside the house was like never seen anywhere else before. There was a 10 feet deep ditch inside the house serving like a well from where the nocturnal siblings collect water for their daily needs. This correspondent met two of the siblings personally while the girl fled seeing the increasing crowd and another was taken away to a neighbours’ house. The siblings had their own lingo with which they communicate among themselves. While talking to Assamtimes the parents admitted that their children were absolutely normal at birth but they started observing certain abnormalities in their son Dibedhar when he was around 8 years old and slowly the abnormalities passed on to his younger siblings. The parents also admitted that they could not afford any medical treatment to cure their childrens but took help of a “Bej” believing that their children were in possession of some evil power. The local villagers and neighbours said that they were never so curious about these siblings as they never hurt or disturbed anybody until that day when a ruckus occurred in the family regarding some matter and they turned violent and injured a cow belonging to the family. Then the parents called the neighbours for help which brought to light many unknown and untold facts about the siblings. When the local villagers rescued the siblings from their den they were shocked beyond disbelief at the condition in which the siblings were passing their days. Thereafter the villagers bathed them, cut their nails, put on clean clothes, thereby acquainting them with daylight.

It is pertinent to mention that despite leading a primitive life in the 21st century, this unusual group of siblings are well skilled in handy work and it is evident from the large quantity of bamboo and cane utensils they have made themselves. They are also engaged in vegetable cultivation that supplied them their daily food needs. To sum up, we can only appeal to the NGOs and other interested groups and individuals if they can offer psychiatric help or any other medical treatment to these siblings and help them lead a normal life.

24 Jul 2007 - 9:14am | editor
Guwahati : AASU had called for a Rail Abarodh on Tuesday between 11 am to 3 pm. Trains services were disrupted in Guwahati, Lumding, Lakua, Sarupathar, Kokrajhar and various other places in Assam....

14 Apr 2011 - 1:47am | editor
Thirteen activists of two underground organizations of Assam have formally laid down arms to Manipur Chief Minister O. Ibobi Singh at the Mantripukhri head-quarters of IGAR (South) on...