Krishak Mukti Sangram Samity’s (KMSS) activists were lathicharged in Tengani area of Golaghat district today. The KMSS activists were staging a rail blockade programme at Jamuguri and Tengani area at Golaghat District demanding the return of the ships carrying turbines to the Lower Subansiri Hydro Electric project. More than 30 people were injured after the Police resorted to lathi-charge and lobbed tear gas shells in a bid to calm the protesters down. The injured were admitted in Golaghat Civil Hospital, six of them were seriously injured. Police also detained KMSS central committee executive member Soneswar Narah.

Verghese is no more, cremation today 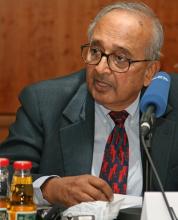 31 Dec 2014 - 8:34pm | AT News
B G Verghese is no more. The award winning author and veteran journalist died at his own residence in Gurgaon on Tuesday evening. He was 87. The relentless crusader for the underprivileged is a...

8 Jul 2016 - 7:06pm | AT News
A rising water level of the mighty river Bramhaputra wreaked no ness havoc in Barpeta in the form of flood where Bhogerpar and its adjoining areas have come under the surging waters. These areas with...

12 Apr 2014 - 5:59pm | AT News
EVM malfunctioning disrupted polling in some booths in the second phase of polling in the Lok Sabha elections in Assam on Saturday.But according to sources, the disruption was temporary.  The...
Follow @Assam Times