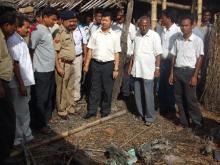 1 Jul 2010 - 5:32pm | editor
Assam on Thursday paid its last respect to the body of six brave hearts two days after they lost their lives at the hands of Naxals in Chhattisgarh. Led by Assam director general of police Shankar...

28 Jul 2014 - 8:17pm | Hantigiri Narzary
The All Bodo Students union(ABSU) and its allied organisations opposed the commisioned of “One Man Expert Committee” naming it national policy for the solution of Bodoland issue from BJP led NDA...