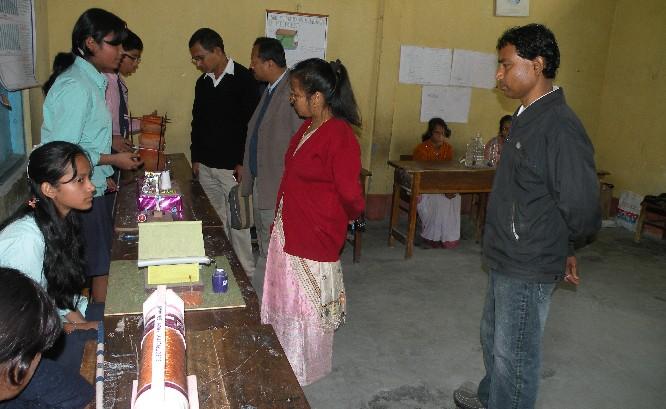 DN Hazarika,Circle Officer,Harisinga Revenue Circle,Tangla hoisted the Aryabhatta flag at 9 AM to mark the beginning of the competition.On the occasion he requested people particularly the students and teachers to take advantage of the latest electronic devices to enrich knowledge for welfare and development.Madhab Sarma,president ASC,Kalaigaon and principal of JNV,Kalaigaon formally inaugurated the open session at 12 AM,which was presided over by Rajashree Bora, principal, MVM, Tangla.Napoleon Daimari, principal, Arunodoi Academy,Tangla attended the session as the guest of honour.The coordinators of ASC,Kalaigaon felicitated him for sending as many as twenty numbers of science projects from his school to Udalguri district NCSC session,held at Ramswarup Agarwalla Memorial English School in October.2010.Child scientist Siba Boro of Tangla HS School was also felicitated at the session for his successful participation at the national level NCSC session in Chennai city in the month of December 2010 as a member of Assam child scientists' team.A few distinguished people namely- Golap Ahmed Hussain,Keshab Saharia, Naren Boro, Hemanta Deka etc also attended the open session as judges.

Permalink Submitted by SUBHANKAR GHOSH on Thu, 10/02/2011 - 05:25
I AM A STUDENT OF DPS FARAKKA DIST -MSD WB I READ IN CLASS 10 I HAVE PREPARED A MODEL ON WASTEWATER MANAGEMENT SYSTEMS & I WOULD LIKE TO PARTICIPATE IN SCIENCE COMPETITION PLEASE CONTACT ME THANKS

29 Jan 2013 - 6:56pm | AT News
The 13th edition of the Delhi Sustainable Development Summit (DSDS) is going to be held on January 31-February 02, 2013 with discussions among global leaders on resource-efficient growth,...