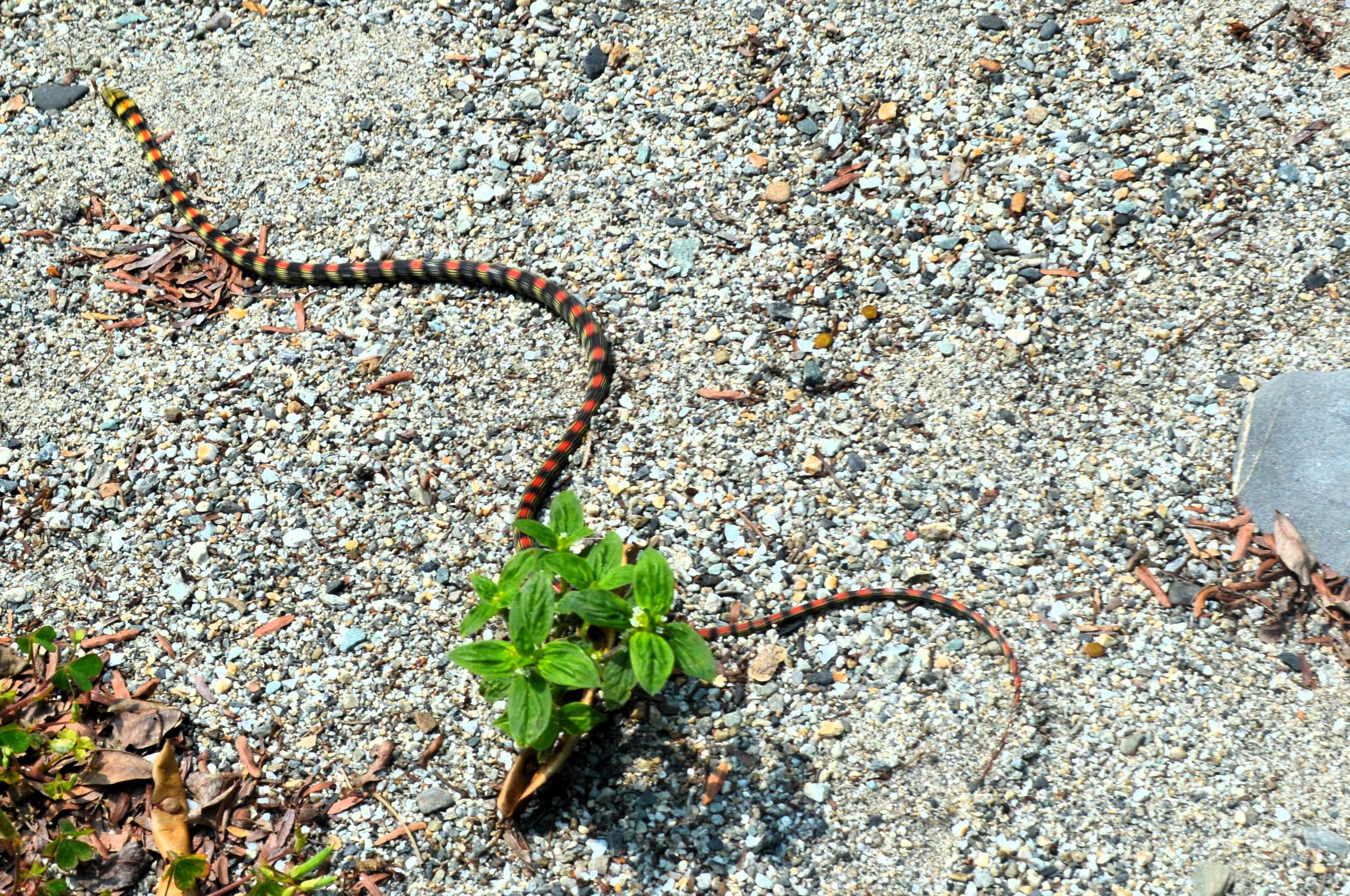 Happy news for wildlife loving people of Udalguri.A rare species of flying snake has been found at Bhairabkunda near Assam-Arunachal-Bhutan border on April 1. Members of man made forest known as JFMC,Bhairabkunda namely – Ismail Daimari.Alfred Daimari,Lenin Daimari and Bimal Daimari found the snake in their forest which was later identified as Chrysopelea Paradisi (Paradise Flying Snake).Its a very fast moving snake and hardly seen on ground.Flying snakes are actually gliders,using the speed of free fall and contortions of their bodies to catch the air and generate lift.Once thought to be more parachuter than gliders. Recent scientific studies have revealed intricate details about how these limbless, tube-shaped creatures turn plummeting into piloting. To prepare for take-off, a flying snake will slither to the end of a branch, and dangle in a J shape.It propels itself from the branch with the lower half of its body, forms quickly into an S, and flattens to about twice its normal width, giving its normally round body a concave C shape,which can trap air.By undulating back and forth,the snake can actually make turns.Flying snakes are technically better gliders than their more popular mammalian equivalents, the flying squirrels.There are five recognized species of flying snake, found from western India to the Indonesian archipelago. Knowledge of their behavior in the wild is limited, but they are thought to be highly arboreal, rarely descending from the canopy.The smallest species reach about 2 feet (61 centimeters) in length and the largest grow to 4 feet (1.2 meters).Their diets are variable depending on their range,but they are known to eat rodents,lizards, frogs, birds,and bats.They are mildly venomous snakes, but their tiny,fixed rear fangs make them harmless to humans.Scientists don’t know how often or exactly why flying snakes fly, but it’s likely they use their aerobatics to escape predators,to move from tree to tree without having to descend to the forest floor, and possibly even to hunt prey.Members of JFMC,Bhairabkunda are happy to see new animals,birds,reptiles coming to their forest which carries new ray of hope to wildlife loving people.It needs mention that villagers of six villages near Indo-Bhutan-Arunachal border have converted a plot of barren lands measuring 5500 bigha into a new green man made forest where they have already planted more than fourteen lakhs of saplings of various rare species. This has already been unofficially recognised as Indian record of human planting 14 lakhs plants. The plants have grown taller and bigger now attracting various species of animals,birds,insects and reptiles.After identification and photograph the snake was released in the forest without causing any harm to it.

30 May 2014 - 8:19am | AT News
Unidentified gunmen shot deada former insurgent leader in Karbi Anglong district on Thursday forcing security forces to intensify operation to nab the miscreants. The incident took place on Thursday...

11 Jan 2010 - 5:44am | Juthika Das
Bihu is the national Festival of Assam. Bihu is also known as “Domahi” or “Domhi” for the people of barpeta. Magh bihu is very popular, especially for the people of Barpeta...

13 May 2016 - 9:15pm | Shajid Khan
A spate of suicides specially among youths in the last couple of days has sent shockwaves through the district. An alarming 8 cases of suicides during April 30 to May 13 reported in the district. The...