A loner wild elephant killed one Lambrey Boro (45) killed and injutred Kathang Boro (38) on Wednesday night (April 20) at 7 PM at No.3 Bongurum in Udalguri district, near Bhutan border. Another girl Bibari Boro (16) escaped unhurt. They were returning home from a Sat Bihu feastival. A few loners permanently staying in the border villages of the district have been causing menace to people for months.

Polling over; eyes fixed on May 16

24 Apr 2014 - 6:20pm | AT News
Polling is over in six Lok Sabha constituencies. The turn out is believed to have crossed 85 per cent in Nagaon, Barpeta, Guwahati, Mangaldoi, Dhubri and Kokrajhar.Now the fate of 74 candidates is... 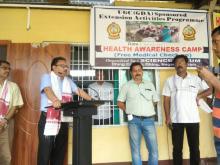 6 May 2017 - 8:44pm | Ranjanjyoti Mahanta
Dhing College Science Forum in association with UGC GDA organised a day long free health awareness and check-up camp as a part of the Extension Activities Programme here on Thursday.The camp was...