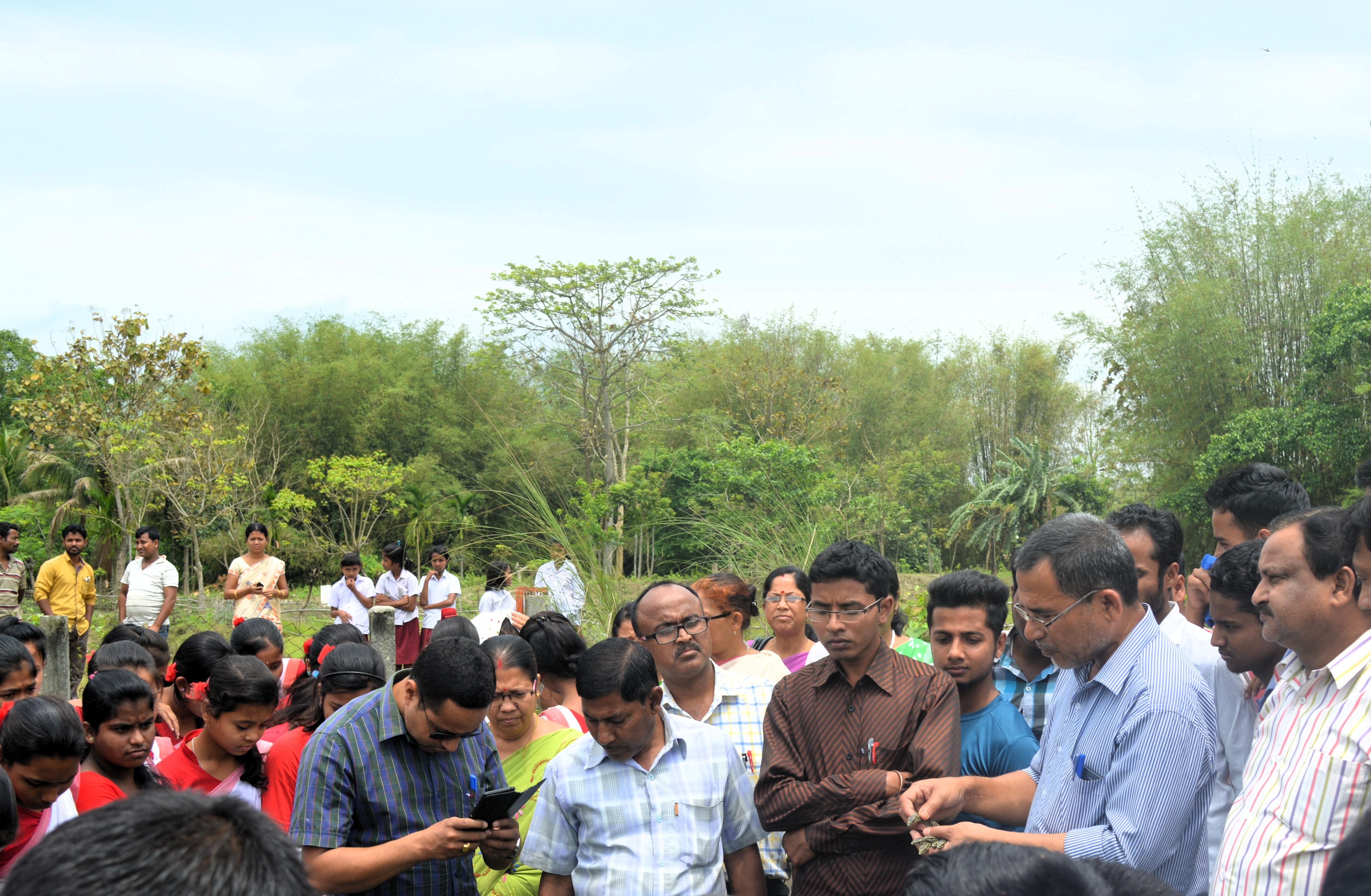 The rescue of twenty five numbers of young monitor lizards (Varamus bengalensis or Common Indian monitor)at Udmari village in Darrang district and their subsequent release in a biodiversity park at Kalaigaon in Udalguri district has brought ray of hopes to nature lovers and wildlife activists.Wildlife activists assisted by nature loving villagers-Mahesh Deka,Biraj Deka and Niren Deka of Udmari village successfully rescued twenty five numbers of young monitor lizards and half hatched eggs at Udamari village on April 4 recently.When the eggs had been hatched nineteen healthy monitor babies were released at Kanaklata Das Bio-diversity Park at Kalaigaon on April 12.Six numbers of weak and sick young reptiles could not be released that day.Fortunately all the young monitor lizards had recovered well and all of them were released in the same place at a formal awareness field ceremony on April 18 at 11 am.An awareness field workshop was arranged on the behavior of snakes,owls and monitor lizards in presence of more than hundred students,teachers of three schools namely-Kalaigaon Girls High School; Lokapriya Bordoloi Public School and Kalaigaon Girls MV School.DN Hazarika,SDO (S),Udalguri who has also been known for his love for wildlife attended the ceremony to thank wildlife activists,teachers and students for coming forward for conservation of flora and fauna. Other distinguished people of Kalaigaon namely-Kamal Prasad Sarma,Mouzadar;Binu Deka Saikia,HM,Kalaigaon Girls High School;social worker Bakul Sarkar etc also attended the field workshop cum release ceremony which was briefed by wildlife activis Jayanta K Das.It needs mention that the common Indian monitor lizard or Bengal monitor has been said to reach nearly 175 cm. Males are generally larger than females.Heavy individuals may weigh nearly 7.2 kg Bengal monitors are usually solitary and usually found on the ground, although the young are often seen on trees. V. b. Nebulosus has a greater propensity for tree climbing. Bengal monitors shelter in burrows they dig or crevices in rocks and buildings, whilst clouded monitors prefer tree hollows. Both races will make use of abandoned termite mounds. Bengal monitors, like other varanids, show true sleep at night and are diurnal, becoming active around 6 AM and bask in the morning sun.During winter, in the colder parts of their distribution range, they may take shelter and go through a period of reduced metabolic activity.They are not territorial, and may change their range seasonally in response to food availability.They are usually shy and avoid humans. They have keen eyesight and can detect human movement nearly 250 m away. When caught, a few individuals may bite, but rarely do so.They are capable of rapid movement on the ground. Small individuals may climb trees to escape, but larger ones prefer to escape on the ground.They can climb well. On the ground, they sometimes stand on the hind legs to get a better view or when males fight other males.They can also swim well and can stay submerged for at least 17 minutes.Unfortunately most of the monitor lizards of Assam have been disappearing fast due to deforeststion and urbanization.

12 May 2015 - 11:24am | AT Political Bureau
As many as 70 per cent sitting Congress legislators will miss the assembly polls early next year. Age matters for 10 per cent of them while non performance and dissidence will matter for the...

Unsung Heroes Amongst Us

16 Jun 2019 - 3:48pm | Taw Nana
My sisters and I are like friends. Some days ago, I was waiting for my sister, outside a shop nearby the roadside (she was late as usual). It was noon. Felt like the Sun god was overly generous with...