It was a carnival like atmosphere at Jalah Village of Nagaon district in Assam as a boisterous crowd cheered at enraged buffaloes locking horns. The owners of buffaloes cajoled their tame animals to fight and win for them a prize.

The village of Jalah, buzzed with activity on Sunday morning with the locals organising the annual buffalo fight. More than 60 buffaloes took part in the event which attracted huge number visitors from distant areas too. The buffalo fights are an entertaining sport organised during Bhogali Bihu, the weeklong Assamese harvest festival. “I am very happy to be here with the people and enjoy this traditional buffalo fight. This type of sports activities helps us to draw one another closer,” said Dr. Durlav Chamua, the chairman of Medical Cell of APCC.

Dr. Chumua who attended the annual function as the chief guest, formally declared the start of the fight. Moreover the team of North East Educational Development Sanstha (NEEDS) a social organization of Nagaon was also present there and provides their supports in organizing the game with local people. Dr. Durlav Chamua while addressing the gathering offers his heartiest wishes to all on the occasion of Bhogali Bihu. The hundreds of people thronging the fighting ring shout louder on their favorite buffaloes.

18 Dec 2007 - 1:33am | editor
Its a significant development in Assam politics inn the run up to the panchayat polls. The All Assam Muslim Council (AAMC) has withdrawn its support from the Asom United Democratic Front (AUDF)... 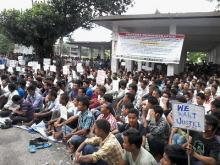