Are they able to take the advantage in pursuing the election politics?The question is fitted adequately with the Oppositons in Assam.The question arises only because of that the Oppositions's incapability to shout against the ruling party even after the Krishak Mukti Sangram Samiti disclosed various scames of the state governemnt.But the Oppostions seemingly could not prepare these as issues for the ensuing election convincingly pushing the ruling party to stage drama.It is said often that the major Oppostion parties lack leader and thereby they are still not able to take forward step, in actual sense of the term, to the up-coming assembly election.This can be applied not only to Asom Gana Parishad but also to BJP.Why such weakness pervades the Oppostions is quite obvious if anybody likes to think for a while.AGP has been in deep crisis since its last ruling period.Allegations of corruption have already been tarnished the image of the leaders of the party.That is why they are afraid of nearing the people with a voice against the ruling party's corruption.Mentionable that AGP could not score well in the last Lok Sabha election as the party has lost two seats which were in hand in the previous election.Be it Prafulla Mahanta or Chandra Mohan Patowary,the similar situation can be applied.Similarly,other top leaders of the party are not completely free from such blames.As such it creates major hurdles for the party in advancing towards the election.However,in BJP,the case is quite different.The state BJP leaders lack essential leadership qualities .Reflection of this was seen in the time of the last Rajya Sabha election when some of its MLAs supported the ruling party's candidate.But no action has been taken against the unruly MLAs though expectation still remains high. Why the top brass of the party remains indifferent towards the matter is a big question .Eventually it takes a shape of weakness for the party. Though corrective measures for the major Oppistions are need of the time but it seems that they are in no mood to do so.They cry but no fruitful result.They are not able to attract attention of the common people unlike Akhil Gogoi,General Secretary of the Krishak Mukti Sangram Samiti.On the other hand,other non-congress parties could not dream of the formation government due to rampant organisational weakness.As for instance AIUDF could not dream of it because it has no base in almost hundred constituancies of the state.It may only dream of formating the governmnat with Other party.But who would be ally for it? Congress Or AGP.Even today AIUDF could not decide it.Mentioanble that AIUDF is afraid of AGP for the fear of clandestine understanding with the BJP.This can also be applicable to the leftist thgough they announced to make understanding with the non-congress parties.As such,people of Assam could not forsee a united opposition on the eve of the assembly election.It needs mention here that the Oppositions get such large opportunities which had not in their hands in the last some elections though they fail to utilise these.In this way the Oppostions hearlds a path to congress to seizing ruling power. 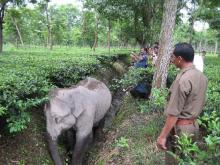 23 Aug 2009 - 9:21am | Jayanta Kumar Das
The eight years old female elephant which had been mercilessly tortured by locals near Koramore on August 9 was rescued by forest and civil administration under police and CRPF protection on August...

18 Sep 2015 - 10:11pm | AT News
Ziro in Arunachal Pradesh is getting a fresh look two days before the historic Nyishi-Apatani Summit. People start thronging in thousands from Saturday in the hilly township to get their names...