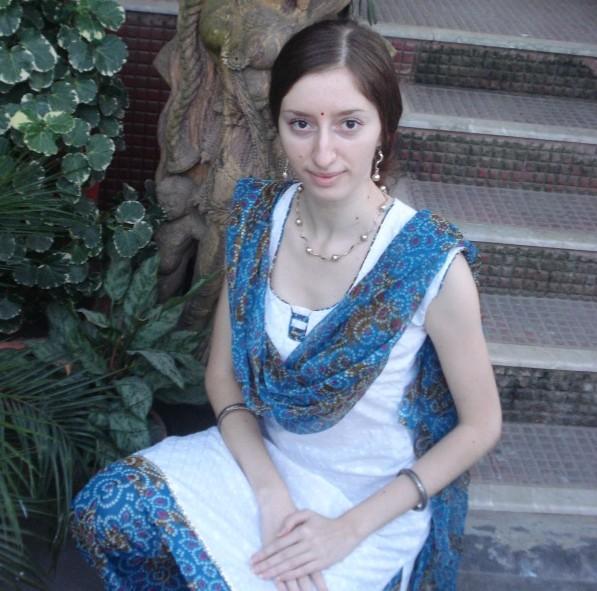 Alena Siadach, a Belarus national, has been in the city since July of this year. She is here not to see the one-horned rhino in Kaziranga but to learn the steps of Sattriya, one of the eight classical dances of India which was originated by Srimanta Shankardeva some 500 years ago.

Not just Alena but several others from the countries like USA and Japan have already embraced the dance form and helping it to go global.

Moving a step ahead, Tokio Yamagami, a Japanese dancer even has started a school in Osaka, named after her guru Ramkrishna Nartan Kala Neketan to teach her Japanese students the ABC of Sattriya. Her teenaged daughter Kotok Yamagani too is into Sattriya dancing and the mother-daughter pair has recently performed in Ravindra Bhawan. Ramkrisna Talukdar, a renowned performer of Sattriya who established Nartan Kala Niketan in 1987 to teach the dancers Sattriya using grammatical methods, is a happy man now to be able to teach the art to the students coming from different parts of the globe.

“It’s in fact, very satisfying over the years to pass on the art to others and increasing the periphery of Sattriya. I’m glad that Sattriya dance is being performed in Japan and US and also in England,” said the dance worshipper who received the Dr BR Ambedkar award in the year 2005 by Rastriya Dalit Sahitya Academy, New Delhi.

Gradually, it is seen the Sattriya has been able to draw the attention of dance-lovers from different parts of the world. When Tokio Yamagami arrived at Nartan Kala Niketan early this year a chapter has been added in the history of Sattriya.

“Earlier no one from foreign countries came here to learn the art personally. Tokio came and learnt the art. Later, she brought her daughter too and now she has started her own school to teach Sattriya in Osaka,” said Talukdar.

For Alena Siadach it’s the spiritual touch that encouraged her to step in Sattriya. She even braved the decision of her parents and landed in Assam to learn the dance which is close to her heart.

“I just liked it after seeing in a journal and later I gathered more information from websites. It’s sort of worshipping to God. I found it very graceful. It’s also helping the audience to get involved with the spiritualism,” said a shy Alena who is also a very good belly dancer.

The law student further said, “I just wanted to learn it even though my parents were a bit pessimistic towards this. But now they have realized that their daughter has been doing something.”

Elizabeth Debonair, an US resident along with Madhusmita Bora and Prerona Bhuyan also doing their part to spread the art in various places in the United States. They are also planning to establish a Sattriya dance school in December.

6 Jan 2017 - 5:59pm | AT News
The next evening OPD at Guwahati Press Club (GPC) will be conducted by physicians from Hayat Hospital of Guwahati. The 7 January camp will be attended by Dr Anjan Saikia of the department of...

Peace talk: ULFA may to clear its stand today

11 Jan 2010 - 5:27pm | editor
The United Liberarion Front of Asom is likely to clar its stand on the peace process with the government even as the Centre is clearing the decks to get jailed ULFA leader Anup Chetia get extradiated...