About 1500 activists of Krishak Mukti Sangram Samity (KMSS) marched a rally at Nagaon on Tuesday. The activists of KMSS gathered at Nehrubali and marched a rally and demonstrated infront of the office of the executive engineer, PWD roads for more than two hours.. The protesters demanded for the immediate repairing of road connecting Kampur with Nagaon via Kathiatoli. In the demonstration, the state president Mulan Laskar addressed all the activists in which he told that the road condition of Kampur to Nagaon is very miserable. He also mentioned that if the government failed to repair the road, they would continue their agitation.

24 May 2017 - 8:32pm | AT News
China has asked India not to disrupt peace in Arunachal Pradesh a day after a Sukhoi  -30 fighter has gone traceless triggering no less tension along the Indo-China border. In his regular... 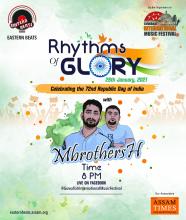 25 Jan 2021 - 8:16pm | AT News
Born to renowned Assamese artists Digen Mahanta and Progati Manahanta, the brother duo of Manmit and Mandeep Mahanta perform together as the band MbrothersH. Music runs in the veins of the duo as...

20 Feb 2015 - 10:30pm | AT News
Journalists’ Forum Assam (JFA) has fervently requested the newspapers and news channels to avoid the description of family members while narrating an accused person in any case. Commenting on...