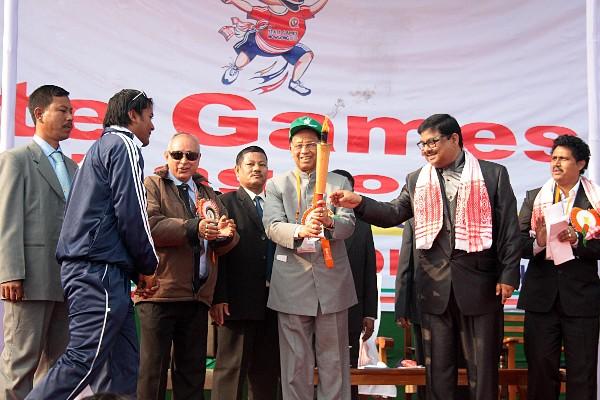 The 2nd State Games, 2010 was inaugurated today in Nagaon, organized by Nagaon Sports Association under the auspices of Assam Olympic Association. The dazzling inaugural function was held at Nurul Amin Stadium in Nagaon, attended by Assam Chief Minister Tarun Gogoi as chief guest ran smoothly before a huge crowd.

. Former Indian Football Team captain and Olympian Suni Goswami Padmashri graced the occasion as the guest of honor. The players from 23 districts of Assam will participate in 24 events which will be held at different locations of Nagaon district.

Beside Gogoi, Assam Forest, Environment and Tourism Minister and the chairman of the organizing committee attended the function. The police brass bands along with the participant teams started their parade and children ran on to the area with rhythmic dances. The colorful cultural performance presented by the dancers of Guwahati and Nagaon leaded by Ranjit Gogoi was appreciated by the guests and the spectators assembled to witness the opening function. The chairman of the organizing committee Rockybul Hussain while addressing all the guests and spectators greeted everyone. He said “Games and sports provide a platform to built brotherhood and friendly relationship between all.” He added that this types of sports activities helps us to bring out the hidden talents.”

After the hoisting of flag, Tarun Gogoi declared the formal inauguration of the state games. On his speech he welcomed the players and the spectators and appealed the players to maintain discipline during their participation. He moreover appreciated Rockybul Hussain for organizing the event in such a wonderful way. Gogoi said “Our players are talented and to give them a better platform, the government organized the state games.” He added that the congress government has taken different programmes for promotion of sports activities in the state.

29 Nov 2014 - 12:34pm | AT News
Amid tight security, Prime Minister Narendra Modi will arrive in Guwahati on Saturday on a two days north east visit.Modi who is on a maiden visit to the region will land in Guwahati in the afternoon... 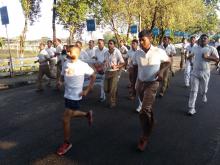