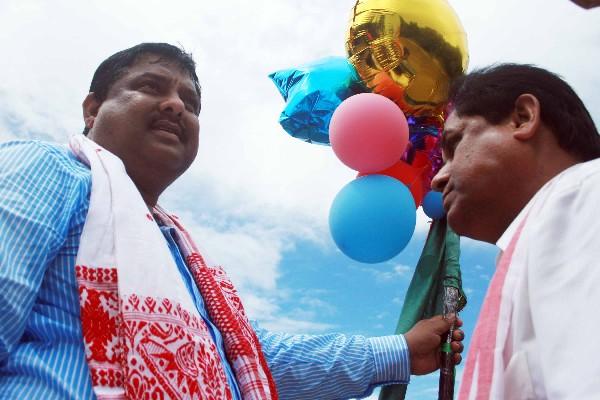 A few years earlier, tourism in Assam was a dream for the people of Assam but it is a reality now. The present Tarun Gogoi led government has given maximum importance in the development of tourism industry in the state as expressed by Assam Forest & Tourism minister Rockybul Hussain in the inaugural function of motor & pedal boat safari on the river Kolong under Assam Tourism Development corporation in Nagaon on Sunday. The inaugural function was attended by Assam education minister Gautom Bora & Chairperson of Assam Tourism Development Corporation Dr Hema Prabha Saikia. In the meeting, the tourism minister broadly discussed about the tourism development in the state and the government is developing new projects to widely attract the both national & International tourists in the state. He further requested the public to cooperate with the officials of the department for the smooth functioning of the project and also told that the government has taken special project to dig the river. He also said that it was his dream to start such a boat safari on the river Kolong and today he felt happy. After the inauguration, the two ministers, chairperson ATDC, the deputy commissioner of Nagaon, SP Nagaon, freedom fighter Bharat Bhuyan and other guests along with media persons started a ride from ADP bridge bank to the bank of Nehrubali. At Nehrubali, the ministers and the guests were welcomed by the cultural troupes. From there the ministers walked to the ground to attend the public meeting arranged in connection with the successful completion of 4 years of Tarun Gogoi led government in Assam.

18 Jan 2012 - 11:54pm | Anup Arandhara
The third establishment day of Moran Sahitya Sabha will be held at Kushal Nagar, Moran on january 29. On this occasion the fine-arts, debate and essay competitions for students are being organised...

11 Jul 2012 - 5:10am | Rini Kakati
Sankaradeva inspired an artistic and cultural Renaissance in the state of Assam. As a religious leader and social reformer Sankaradeva deserve to be mentioned with Sankaracharya, Ramanujacharya, Guru...

11 May 2013 - 8:46pm | Abdul Gani
President Pranab Mukherjee will be arriving on a two-day visit May 13. Mukherjee will give away the Asom Ratna, Srimanta Sankaradeva Awards and to address the 13th Annual Convocation of Assam...