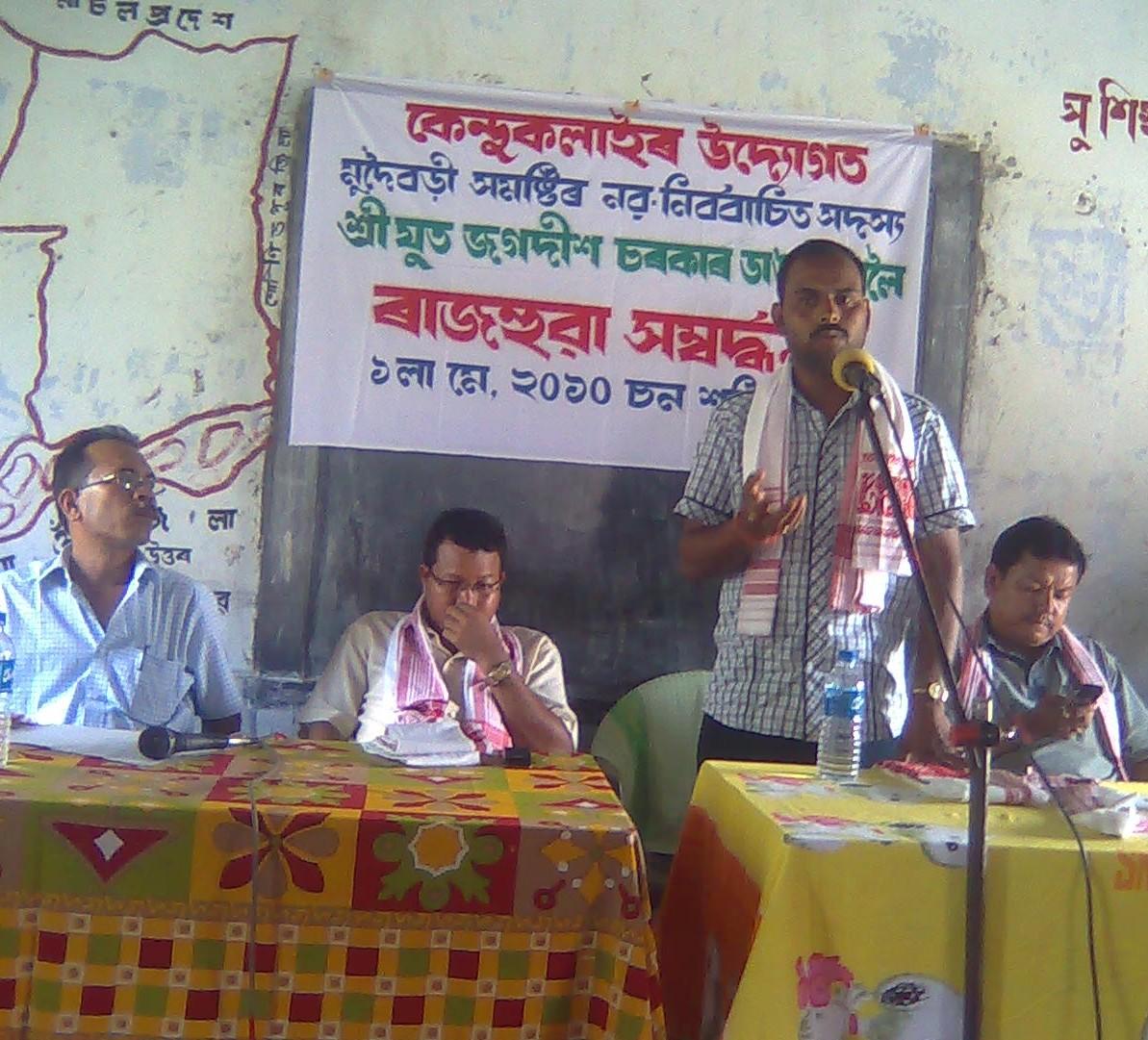 Kendukalai,a socio economic organization of Kalaigaon,in association with other twenty organization and institutions of Kalaigaon town felicitated newly elected BTC MCLA Jagadish Sarkar at a public function at Kalaigaon Town LP School recently on May 1.The felicitation ceremony was presided over by senior journalist Bhargab Kumar Das,which was attended by Mahewar Baro MLA,Kalaigaon and nominated BTC MCLA Dandi Ram Rabha. Social workers Kamal Prasad Sarma and Dandi Kumar Baro anchored the proceeding of the programme before twenty one organizations of Kalaigaon, including Club Musica,Kalaigaon Town Club, Kendukalai,and Bodo Primary Sahitya Sabha etc formally felicitated both Jagadish Sarkar and Maheswar Baro with gamocha xarai and japi. On the occasion Maheswar Baro welcomed Sarkar and said that both of them would respect public opinion irrespective of political affiliation. He also said that BPF had learn t enough lessons in the past five years and would never repeat mistakes of the past. In his thank giving speech,Jagadish Sarkar thanked people of Mudoibari constituency for giving him the new role of public service. Social workers Kami Ram Saharia, Mouzadar Kamal Prasad Sarma,Krishna Baro,Debanjan Sinha and Jayanta Das also spoke a few words on the occasion.

8 Sep 2013 - 12:46pm | Prashanti Tiwari
Assam has not been able to successfully cope well with its municipal solid waste management methodologies wherein E-waste management has crept up as a new kid on the block. Unscientific disposal of...

31 Jul 2007 - 4:41am | Rituparna Goswami Pande
The war of words rising out of the illegal migrants issue between the AASU and the AMSU is heating up by the day and the chances are that this development may push the real issue behind and turn into...

12 Jul 2014 - 10:54am | Jintul Talukdar
Four local traders from Sorhog were believed to have been killed after suspected NDFB(S) militants kidnapped at gunpoint in Baksa district on Friday.   Security forces are desperately...