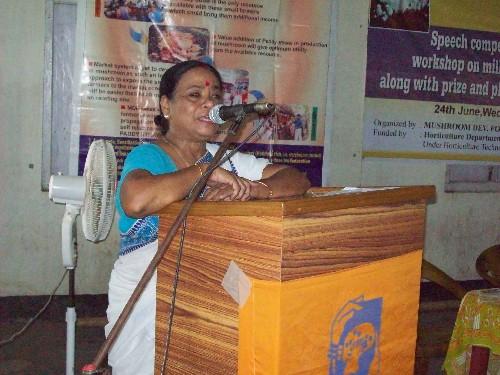 In connection of the above 12 small farmers participated in a speech competition on the topic “Need of mushroom in the formation of farmers’ federation” they gathered from 10 villages’ committee in a cluster of 50 village in Sonapur areas of Kamrup district of Assam representing 1000 small farmers of Sonapur. At the very beginning Mr Pranjal Baruah (Ashoka Fellow) General Secretary of MDF, stated the objective of the meeting. The programme however, inaugurated by the noted film star and veteran stage actor Shrimati Chetana Das and judged the speech competition along with Dr S K Dutta, Dy- Director, NIRD, Guwahati and the noted professor Mr Biman Patowary from Sonapur College.

The speech competitors mainly focused on mushroom cultivation as a good source of income generation, nutrition, and easy activity as compare to other field cultivated crops. Further, it was clearly stated in their respective speeches about the need and thoughts of the formation of a organized federation, helps them as well for easy access to planting materials, technology, finance and market. The competition was followed by inauguration of the workshop, prizes distribution, technical sessions of the workshop on cultivation of milky mushroom and distribution of planting materials (spawn and hay bags) to grow milky mushroom.

Milky mushroom is a summer variety mushroom which grows in 30 – 40 degree centigrade and is a much needed crop to make mushroom cultivation sustainable throughout the year. For experimental and demonstration purpose, recently Pranjal Baruah of MDF had collected various strains of milky mushroom from Tamilnadu Agricultural University located at Coimbatur, the experiences of the farmers in various parts of rural Tamilnadu, Indian Institute of Horticulture Research, Hasrakata, Karnataka. The MDF’s plans of action are as follows:

i. Had cultured the strains in its laboratory at Directorate of Agriculture Campus, Guwahati.
ii. Propagated the milky mushroom spawn and distributed it to the farmers at Sonapur after training them in this workshop. This is for the first time in the North East 200 farmers have gathered in a mission with a determination to start growing milky mushroom together in a cluster.

Prizes were distributed to 3 best progressive farmers, extraordinary performance awards each for a volunteer and an organizer and for 4 participants of the speech competition.

Shri Harsha Joti Barooah in his speech mentioned the importance of horticulture crops and mushroom being a part of it will give full support to the efforts of the small farmers organizing themselves for mushroom cultivation. We also mentioned on the need for development of the mushroom market in the Northeastern region and that the government will provide full support by giving government developed mushroom infrastructure to the organized farmers of Sonapur.

Dr S K Dutta, Dy- Director, NIRD, Guwahati in his speech had mentioned the importance of mushroom and its potentiality in the agro-economy of this region. He also explained the power of small farmers organizing into cluster and its impact on the market. He has also appreciated the creative ideas of MDF and its manifestation through the small farmers in and around Sonapur

Mrs Chetana Das applauded the work culture and discipline of the mushroom farmers of Sonapur and urge them to carry it forward as an example to the State and the nation. She also suggested organizing short street plays and making the benefit of mushroom and farmers organization known to the masses through it and assured all technical assistance in this regards. The biggest encouragement to the farmers was assured by her by involving herself as a part of this silent revolution started by MDF with the farmers of Sonapur.

An exhibition of various species of mushroom and different FPO products made out of mushroom under the brand name of “mushfill” was demonstrated in the event. The different products demonstrated, such as, mushroom cultures, mother spawn, spawn, fresh and dry oyster mushroom, fresh button mushroom, bhujia, papad, pickle, biscuits, cakes, soup powder, seasoning, face pack etc all made of mushrooms caught most of the guest in the event by surprise.

Permalink Submitted by N.A.Gopinathan on Sat, 01/08/2009 - 14:16
Hi, I am a small time farmer in Milky Mushroom. It is started after a brief training in a class room. Then after a Humidity tent is built through a job work given to a professional group in the field. From April I could take mush room flushes in micro scale. Many are knowing its medicinal value. But, at this stage and scale of production marketing is found little difficult locally. I want to get some recipes for pickles, mushroom soup powder preparation, and Bhujia. Will somebody be kind enough to let me know the recipes?

25 Dec 2011 - 6:05am | editor
Assam is reeling under severe cold wave along with other north eastern states even as weathermen predict more chill in the entire state. Guwahati on Saturday witnessed further dip in...

9 Nov 2016 - 11:19pm | AT News
The city based ARH Diabetes Centre, a branch of Chennai based Dr A Ramachandran’s Diabetes Hospitals, has organized a free diabetes screening & awareness camp for the member-journalists of...