As per the Press Communique,AAMSU came to know about Chandrani Pal who has been detained in a detention camp in Tezpur  for 19 long months after being declared as a ‘Foreigner’ by a Foreigner’s Tribunal in Assam when the news was highlighted by different media mediums  on June 9,2019.

On the direction of AAMSU Central  President Rejaul Karim Sarkar, advisor Azizur Rahman, legal adivsor Mustafa Khaddam Hussain and members, a delegation of AAMSU Hojai District Unit met the husband of Chandrani Pal named Dulal Pal. They discussed about the case and assured of legal help to the family members on huminatariam grounds.

As per press communique Pal  had tied the knot with a resident of Doboka Ward No.6 of Hojai District named Dulal Pal over a decade ago and were residing happily.

Her daughter was one-an half year old and son was Seven Years old when she was declared foreigner. At Present the condition of both child is not good. Whenever anyone visits their house, they hide themselves in fear of Police.

Notably, After getting a D-voter tag and not being able to show the necessary documents in time, Pal was  declared as a ‘foreigner’ by a Foreigner’s Tribunal and had since been detained  in the detention camp in Tezpur.

Actually Chandrani pal hails from Lumding. She is the daughter of Late. Devendra Pal.

Chandrani Pal had documents of her parents property of the year 1935 and a document of shop of her father in the year 1945.But she could not produce them in time before she declared foreigner.

The family members  of Chandrani Pal has knocked all the legal doors but their efforts has not brought any result till date. 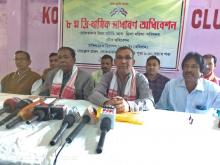 12 Sep 2015 - 8:17am | AT News
Normal life across the state comes to a grinding halt on Saturday following the 12 statewide Assam bandh in protest against the Centre’s move for Indian citizenship for all non Muslim Bangladeshi and...
Follow @Assam Times