The Assam government has recommended CBI probe into the rhino poaching incidents that repeatedly rocks Kaziranga National Park. Chief Minister Tarun Gogoi on Sunday said that the state government had already written to CBI for probe into the recent rhino poaching incidents in KNP. He said that it might be a big political conspiracy into the big horn animal killings, where militants are also involved. The move came 24 hours after poachers killed ome more rhino in the word heritage site. Assam had lost at least 42 rhinos in 2012, where poachers killed 21 rhinos in KNP. In this year, poachers killed seven rhinos in Kaziranga.

26 Feb 2009 - 6:02pm | editor
Two hardcore ULFA militants died during a heavy gunfight between ULDA and police and security forces in Majuli on Thursday morning.According to information, acting on a tip off that a team of ULFA... 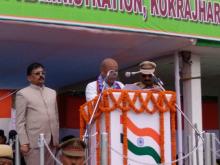 17 Jun 2008 - 3:21pm | editor
The army killed two more terrorists at an encounter near Namsai along Assam-Arunachal border early in the morning on Tuesday. According to information, the encounter with the Army's Dah Division took...
Follow @Assam Times