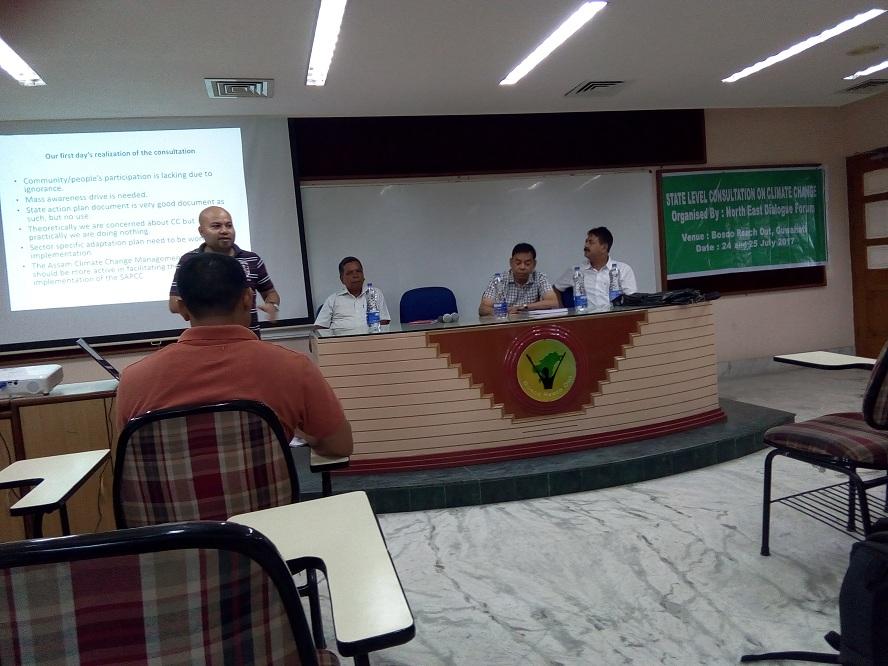 North East Dialogue Forum, a network of civil society organisation has organised two days state level consultation related to climate change at Bosco Reach Out, Guwahati on 24 and 25 July. Ranjan K Baruah of North East Youth Foundation mentioned about the state climate action plan and presented about proposed activities of different departments. He mentioned that there is less awareness amongst public related to the plan and no visible action could be seen anywhere in the state. Nava Thakuria, Secretary of Guwahati Press Club said that media has immense role to make people aware on climate change and its implications. Moreover media can compel the government as well as policy makers to adopt strategies to counter any kind of disaster. He added that at least in adaptation the policy maker can create pragmatic strategic and also help people rehabilitated.

Senior forest official A K Johari, IFS has mentioned that people in the state may adapt with the rich traditional knowledge and he appealed the people and also students to preserve the rich bio diversity of the state for combating climate change. Pallab Sarma, Senior Scientist of Biswnath College has presented case studies and he believed that scientist may give inputs for combating climate change. U Nobokishore from NEDF has mentioned that all the states in the north east must have coordination while making climate action plan as the states are connected with resources like water and others. This consultation has been moderated by Girin Chetia of NEADS, Jorhat. Different NGOs, students, researchers, media person and representatives from civil society organisation participated in the consultation and committed to work for combating climate change in the state.

25 Nov 2014 - 10:23am | AT News
In yet another bizarre incident, a man killed his one year old girl when he had a quarrel with his wife in Karbi Anglong district sending shockwaves across the state on Tuesday.The incident took...

25 Jun 2012 - 2:49pm | Syed Miraz Ahmed
A 10 member-strong CBI team from Shillong is in the industrial town of Umrangsho in Dima Hasao District today to raid the residences and offices of 3 top Neepco officials and a private company...