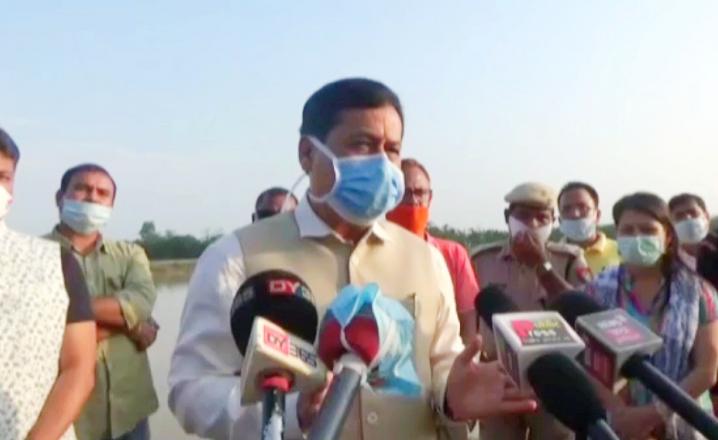 Notably, due to incessant rain last week, the Kopili and Jamuna river were over-flooded as a consequence of which many villages of the district were submerged in first wave of flood.

The present wave of flood has hit 93 villages affecting 94,445 people and 7650.50 hectare agricultural land of Hojai district. 54 relief camps were established and so far given shelter to more than 10 thousand inmates.

Sonowal further directed the Deputy Commissioner Dr. Sadnek Singh and other officials  to take necessary measures for the repair works, rescue and rehabilitation in co-operation with local MLA and Minister in Charge.

Speaking to the reporter's on the sidelines during his onsite visit, Chief Minister Sarbananda Sonowal appreciated the residents of the state for strongly dealing with  the four menance at a time viz., Covid 19 pandemic, flood, stroms and african swine flu with postive attitude without paniking and supporting the government endeavours.

Chief Minister said, "We have full faith on Prime Minister Narendra Modi that under his vibrant leadership,there will be a permanent solution of chronic problem's of the State along neighbouring State like  flood, landslides, erosion;etc."

He said for first time BJP led Modi government  constituted North East Water Management Authority under the Chairmanship of the vice chairman of NITI Aayog for the permanent solution of flood and erosion.  He  hoped that in the coming days Assam along with other neighbouring states will get relief from this clamaties.

Sonowal  lauded the efforts of Prime Minister Narendra Modi for giving equal priority to NorthEastern States, he claimed earlier no government have given such importance to these States or formed such highlevel Commiittee's for it's upliftment.

Minister of State for Health and Family Welfare, Hojai MLA Shiladitya Dev, Lumding MLA Sibu Mishra, officals and many other workers of BJP were present, during the CM's Visit.

4 die while installing motor at Dimakuchi

16 Aug 2010 - 11:52pm | Juthika Das
The 64th Independence Day was observed at Barpeta also along with the rest of the country on Sunday. Unfurling the National flag at the Govt HS school premises the deputy commissioner of Barpeta...