On 22nd and 23rd October, Golaghat book fair witnessed the release of two books. On 22nd October noted poet, litterateur and editor of Gariyashi, Hare Krishna Deka inaugurated a book titled “Tathya Janar Adhikar” written by Sri Debojit Phukan. The book is a guide book in Assamese language to Right to Information Act 2005, the most talked about topic of these days. Talking to Assam Times, Debojit Phukan said that he was hopeful that his book will help the people to rip the benefits of the Act.

On 23rd October another book titled “Diburuye Ringiaai” a set of novels written by noted novelist Sujata Baruah Gohain was released Rofiqul Hussain, noted drama personality of Assam. Diburuye Ringiaai consist of two novels namely “Diburuye Ringiaai” and “Khuj” which were earlier published in “Amar Asom” serially. The first novel portrays the nostalgic reminiscences of writer’s student life in Dibrugarh University and the other highlights that learning is a life long process and it stretches from the cradle to the grave. 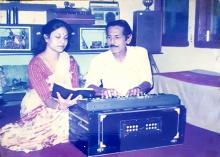 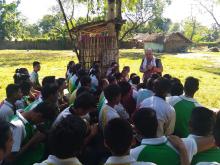 18 Jan 2012 - 11:54pm | Anup Arandhara
The third establishment day of Moran Sahitya Sabha will be held at Kushal Nagar, Moran on january 29. On this occasion the fine-arts, debate and essay competitions for students are being organised...
Follow @Assam Times