To ensure free and fair conduct of the upcoming Legislative Assembly Election 2018 in Meghalaya, the State Level Media Certification and Monitoring Committee (MCMC) is constituted with the Chief Electoral Officer, Meghalaya as the Chairman.

The members of the Committee include Additional Chief Electoral Officer, Meghalaya, Expenditure Observer (to be nominated by CEO), Director, Information and Public Relations, Meghalaya, Deputy Director of Field Publicity, Shillong and W Rapheal Warjri, Media Plus, Media Representative. The Joint Chief Electoral Officer will be the Member Secretary.

The functions of the Committee is to decide on appeals against orders of the MCMC headed by the Additional CEO/District Election Officers on Certification of Advertisement as per ECI’s instructions, to examine all cases of paid news on appeal against the decision of District MCMCs and to take up suo moto action and direct the concerned DEO/ROs to issue notice to the candidates or political parties.

31 Jul 2014 - 9:26pm | AT News
Five people were feared dead when the camp in which they lived in collapsed in landside in Cachar district bordering Manipur. The incident took place in a remote area of Kantum under Lakhipur on... 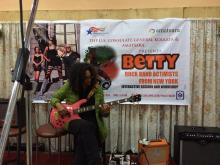