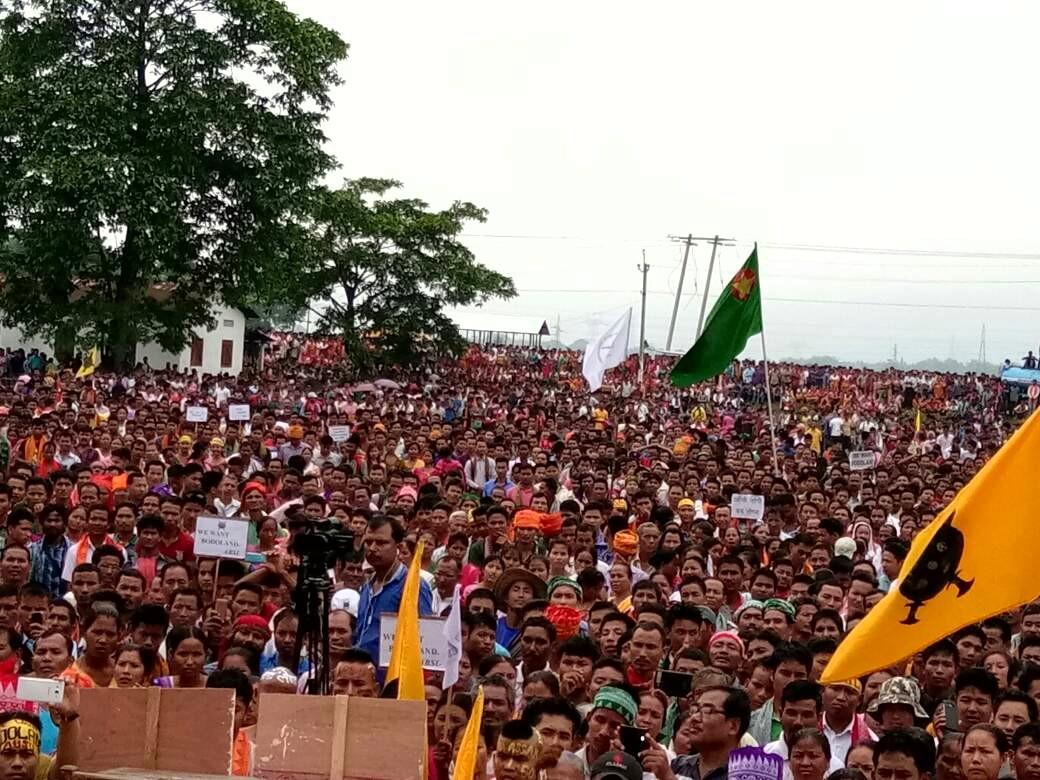 Demanding adoption of a clear cut and pragmatic policy decision from the government, regarding formation of Bodoland,Bodo people,the largest tribal group among the tribal s of NE, determined to protect their unique identity and culture at any cost, nearly a lakh people attended a central Mass Gathering at Rowta in Udalguri district on June 3. The programme was jointly organized by ABSU, NDFB(P) and PJACBM as a part of their series of movements, demanding Bodoland state.The NH-15 was totally blocked for several hours,disrupting vehicular traffic.The Mass Gathering was attended and addressed by several leaders namely-Sapnajit Sanyal, Working President,Vidharba Rajya Agadhi, Maharastra;Neeraj Khandelwal, Secretary, Nagpur;Gobinda Basumatari,General Secretary, NDFB(P); Dr. Nabla, Chairman, NDFB; Guneswar Goyari,MCLA,BTC; Pradip Kumar Daimari,General Secretary UPP;Pramod Boro, President and Dipen Boro, Vice President, ABSU etc. According to Pramod Boro, President,ABSU,the movement group has resumed its democratic mass movement through this Mass Gathering at Rowta in Udalguri.He also announced the following series of programme to be continued until the government resolved the issue for once and all.There will be a two hours Black Out from 6 to 8 pm on June 12,National seminar in the month of July,Economic Blockade in September etc.

10 May 2016 - 6:32pm | AT News Itanagar
Pasighat Division forest department along with the Friends of Eighties a socially active group took up a mass tree plantation program from Medical Charali to Sibo Korong bridge at Pasighat. DFO,...