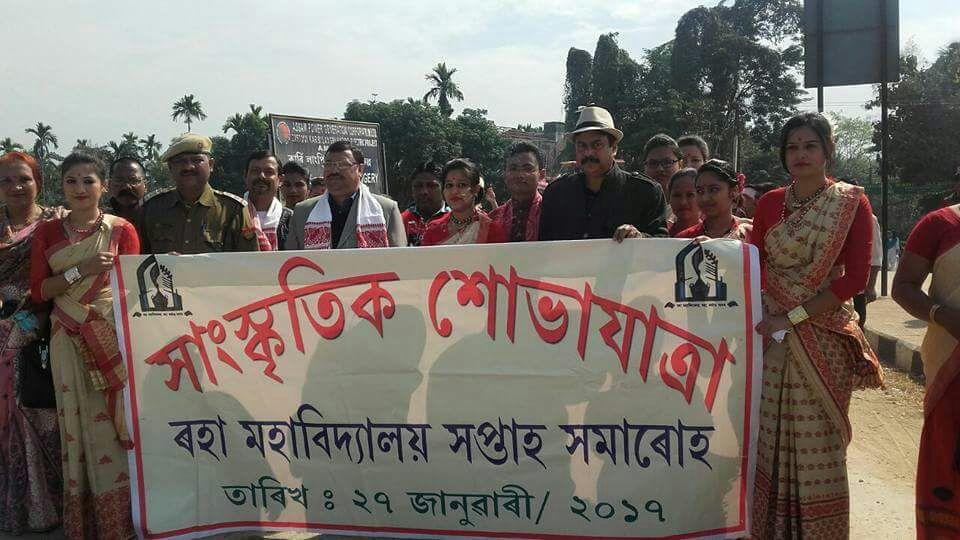 Raha, the name of an area hemmed in between Nagaon and Morigaon districts of central Assam turned in to a mini north east when a local college took out a huge procession showcasing the region’s rich art and culture on Friday.

The student union of Raha College took the colourful procession in the area in the morning to mark the on going college week which is closing on Saturday.

College principal Beda Prasad Chaliha flagged off the procession in presence of his teaching and mon teaching staff which drew huge applause in the entire huge area a couple of months after Raha was hit by protest over the move to shift the proposed AIIMS in the area.

Other focus of attraction of the college event this time is games and sports apart from other shows. Cultural shows are also lined up on the occasion.

23 Jul 2016 - 5:47pm | Sanjoy K Kakati
Many local organizations in Raha on Saturday have reiterated the demand to set up the proposed AIIMS in the area. Attending a huge public meeting in Raha, the speakers representing various local...

10 Mar 2017 - 2:43pm | AT News
Criminal activities have become the order of the day in some pockets along  the Assam-Meghalaya inter state border much to the major worries of the people dwelling in the border areas for...

3 Mar 2016 - 7:20pm | AT New Delhi
Keeping an escalating protest at bay, AGP formalized poll deal with BJP on Thursday where the regional party would be contesting in 24 seats. "Other seats are left for BJP and alliance," said BJP...