B’deshi go back slogan in Nagaon 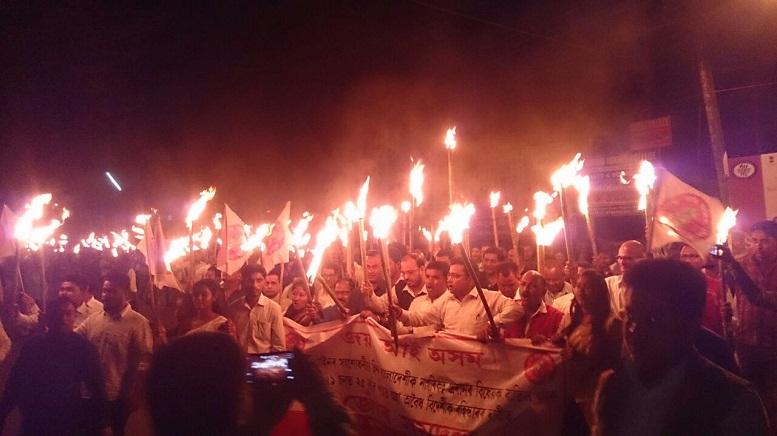 Amid an escalating tension over the Silapothar incident, hundreds of people spilled into the roads in Nagaon town on Wednesday evening demanding arrest of Soobodh Biswas, the culprit who is on the run.

Apart from 600 students, many other local residents also joined the torch rally organized by AASU who shouting slogans against the attack on the local AASU office in Silapothar.

“Where is Soobodh Biswas? Why should he be spared? Hold him for exemplery punishment,”said an AASU protestor Mridul Hazarika.


The AASU protestors further warned the immigrants to quit Assam irrespective of their religions and slammed to government’s move for citizenship status to the Hindu immigrants.

“Forget Hindu, Muslim, those who came after the cut off date, March 31, 1971 must quit Assam. Otherwise, we are ready to go to any extent,” said Sanjay Kakoti, a local AASU leader from Raha who participated in the torch rally.

9 Nov 2017 - 8:28am | AT News
An Assam Police Service officer who was wanted in connection with the APSC scam has surrendered before the investigation officers in Guwahati hours after 15 others were arrested.  Identified as...