According to the legends the history of Athkhelia Namghar dates back to the period of 1670 to 1681 which was a crucial time for Ahom kingdom. At that time Ahom kingdom was ruled by Lora Roja. He in order to secure his position as a king of Ahom kingdom ordered to maim all Ahom prince of that time by making them physically disabled so that they cannot ascend the thrown. Gadapani one of the Ahom prince of that time in order to save himself from the clutch of Lora Roja, took shelter in Nagapahar. At that time he came across the ashram of a saint which was situated at the place where Athkhelia Namghar stands today. He took shelter at that place. In 1681 when he becomes the King of Ahom kingdom he entrusted the task of maintaining and preserving this sacred place to eight selected Khels of that area.

As told by the Secretary of Athkhelia Namghar Managing Committee, Sri Chandra Pathak, during the holy month of Bhada, Athkhelia Namghra witnesses a crowd of around 20 to 25 lakhs of devotees every year. He told that suitable arrangements are undertaken to accommodate such a large number of devotees. A guest house was constructed in the premise of Athkhelia Namghar in order to provide accommodation to devotees visiting Athlhelia Namghar from far flung areas. Efforts are also taken to build a cultural museum. Keeping in view of the large number pilgrims expected to visit Athkhelia Namghar during the holy month of Bhada, construction of a bus stand is also going on full swing. Sincere efforts should be made by ATDC to convert the place as an ideal pilgrimage destination thereby adding to the rich cultural heritage of the state

Permalink Submitted by Nanda Kirati Dewan on Tue, 29/07/2008 - 17:58
Aatkhelia Namghar is another heritage of Assam. Government and the people should preserve as well as observe.

Permalink Submitted by Shri Manick Cha... on Fri, 12/06/2009 - 18:56
Thanks to Ritu Pallab Saikia for giving lot of information about Shri Shri Athkhelia Namghar.I hope you will try to provide regular information and photos of religious functions of namghar. May Athkhelia Mahaprabhu bless you.

Permalink Submitted by Hiranya Gogoi on Thu, 27/08/2009 - 09:34
Thanks, Ritupallab for giving a lots of information about Athkhellia namghar.

Permalink Submitted by manisha medhi on Fri, 12/03/2010 - 19:13
Thanks to Ritu pallav Saikia.This information so helpfull for me. I hope you will provide vast information about history of bharali namghar.

Permalink Submitted by Mrs.Moni Bora on Tue, 19/10/2010 - 03:15
It will be nice if somebody take pain to create and upload vidios of"Bhowona","Pal-Nam","Bor-Sabah","Panitola Sabah",nam and gathering of devotees in Vadra Mah etc.etc. in Namghar.I offer my prayer to Mahaprabhu.

Permalink Submitted by rashmi koch(mar... on Thu, 11/11/2010 - 17:22
thnks for this nice photo.. this information is very important for me...i went this namghar 3 times but i can't take any photo,so that ur photo of atkhelia namghar is helpfull for me.

Permalink Submitted by Bhabenjyoti Bora on Fri, 23/09/2011 - 14:56
At present not found the real history of Athkhelia namghara, It is most important vast studies of local religious custom of people

Permalink Submitted by Bhabenjyoti Bora on Fri, 23/09/2011 - 15:01
At present not found the real history of Athkhelia namghara, It is most important vast studies of local religious custom of people

Permalink Submitted by Ashim Bora, Pre... on Sat, 04/02/2012 - 21:58
Thank you for all of you. Specially we are thankful to the above informer and the all commentators. Thanks for all donors who donated money and materials for SRI SRI ATHKHELIA NAMGHAR RECRONSTRUCTION, SPECIALLY TO AJANTA NEOG, MINISTER OF ASSAM AND DR. AJIT BARUA, CHAIRMAN,GMB.

Permalink Submitted by JADAV CHUTIA on Sun, 24/06/2012 - 17:57
Its realy great things that at last all of will able to know about our Athkhelia namghar.

Permalink Submitted by Pranab Bora on Mon, 03/09/2012 - 19:23
We should try to preserve the historical value of the ATHKHELIA NAMGHAR .

Permalink Submitted by Manick Chandra Bora. on Sun, 16/09/2012 - 23:28
Pranam to Athkhelia Mahaprobhu.I am happy to see the progress of Athkhelia.Thanks to Ashim,president and all members of the committee and well wishers.May God bless you all.

Permalink Submitted by ARUN KALITA, SI... on Mon, 10/12/2012 - 11:00
i am happy that athkhelia namghar open their web site and update information. Namghar is piller of the assam. we proude of it . therefor digitization is very importent. I'd like to thanks to the committee .

17 Feb 2015 - 5:05pm | AT News
Union minister of state for home Kiren Rijiju a well organized cultural interface can go a long way in eradicating feeling of estrangement and boost bonhomie. In his address at the chef guest at... 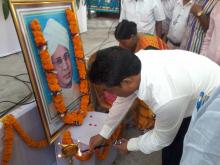 5 Sep 2015 - 11:29am | Hantigiri Narzary
Teachers community in Kokrajhar, heart of BTAD administration remembered contribution towards development of the country and paid rich floral tribute to former President of India, Bharat Ratna and...