KMSS leader Akhil Gogoi has urged the people of Raha to intensify the agitation for the proposed AIIMS in the central Assam area.

Addressing a press conference in Guwahati on Sunday, the fire brand RTI activist said that without a massive agitation, the government will not care even an iota to the voice of protest.

He said that KMSS will join the agitation to ensure the proposed premier hospital in Raha. He strongly criticised the Government alleging that Sonowal and his government have been misleading the people of Raha with blatant lies.

“No, the Centre never finalizes the location. It is for the state government to take the final call,” said Gogoi. 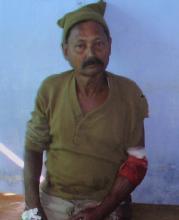 18 Dec 2007 - 1:53am | editor
Two policemen died and five others injured when the militants of Jewel faction of Dima Halam Daoga attacked the 17th company of the 8th APBN in NC Hills' Phaiding areas at around 4-15 in the...