Flood situation in Kaziranga National Park, the only World heritage Site in Assam, is again taking a disastrous form. With the rise of water level in the river Brahmaputra, new areas have come under the threat of flood. Nearly 70% area under Burapahar range of KNP is being water logged. On the other hand areas like Kohora and Agaratali is also being flooded. If the water level continues to rise at such a rapid speed the situation is most likely to deteriorate very soon. The situation may become more aggravated if the rainfall increases in the days to come.

Permalink Submitted by a medhi on Sat, 03/01/2009 - 20:50
The Brahmaputra embankment throughout the world famous KNP at its north must need an innovative structure to protect from severe erosion. If we gone for a boat safari by its north bank, we can visualize, how the tall trees are falling down and floated away by the the turbulent water of the mighty Brahmaputra. We would like to suggest pile construction on the said bank from Agaratoli to Jakhalabonda (as alternative of parcupine) and in between pile rows plantation of mangroves trees. In 2nd phase, stepwise slab can be erected with cementing over the pile caps innovatively leaving the natural slops (including marshy-pockets and beautiful river-beaches with Kohuwa grassing, which are safe selter for some wild-lives and also for local and migratory birds) those usually used by wild-lives. High gaurd towers on the north bank at frequent interval must be erected. On the bank portions, where erosions are more severe must need a step type retantion wall. Steps width must be remarkably more so that no casualties would occur to wild-lives as they come down to the river using these stepped corridor.

23 Apr 2014 - 6:51pm | Jayanta Kumar Das
With the ending of election campaign and arrival of polling officials in the polling stations in 8 Mangaldai HPC, BJP has been keenly challenged by AGP and Congress. Earlier it was thought to be a... 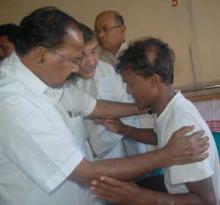 Violence: Moily in talks with Gogoi, others

29 Nov 2007 - 9:10am | pbaruah
The AICC general secretary in charge of Assam Verappa Moily is holding talks with Chief Minister Tarun Gogoi and senior party members to prepare a detail report on the Beltola violence that could...