18 Jan 2013 - 8:53pm | editor
Guwahati hosted the first ever International Tourism Mart of the North-East on Friday.The three-day event at the Sarusajai sports complex witnesses large number of nations and a matching assemblage...

6 Mar 2015 - 10:03pm | AT News
Dispur Hospital has organized a general health check-up camp for scribes and other media employees along with their close family members in Guwahati Press Club on 11 March 2015 (Wednesday). The camp... 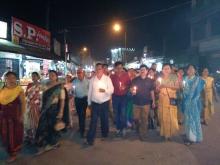 30 Oct 2016 - 10:03pm | AT Kokrajhar Bureau
A candle lighting rally was organized today at Kokrajhar town while observation of October 30 serial blast day, which had claimed 20 lives in Kokrajhar town during blasts along with three places in...