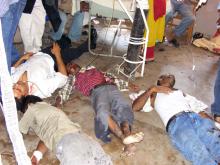 31 Oct 2008 - 3:48am | editor
The serial blast on Thursday has touched off a seismic wave of reaction throughout Assam. The Assam government is remaining clueless while the United Liberation Front of Asom(ULFA) has straightly...

24 Nov 2017 - 9:34am | Akshaya Pranab Kalita
The All Assam Press Correspondent Union has expressed grave concern over the repeated killing of scribes in the country and has demanded measures to ensure their safety and security.  In a...